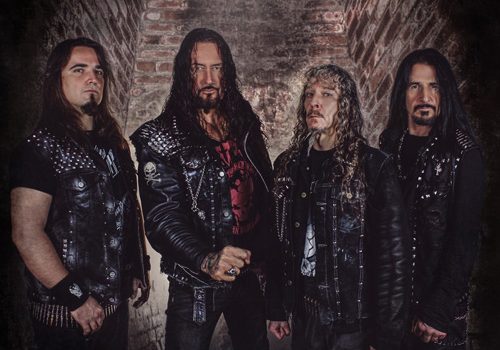 When life throws lemons, many individuals make lemonade. Case in point – the COVID-19 pandemic that took over the world by the spring of 2020 – essentially shutting down the live music business for any genre, metal included. Destruction bassist/vocalist Schmier decided while on vacation to issue a spontaneous live album capturing a show from last summer at the Party San Festival. Born to Thrash (Live in Germany) features the band as a quartet, slicing and dicing their way through a best-of set including a couple of new songs from their last studio album Born to Perish. It’s great to know that with how long of a history the band has, you can feel the excitement, the passion, and the energy from the band to the fans throughout this record.

We reached out to Schmier to learn more details around this surprise release, how the chemistry is working within the four-piece now, thoughts on management duties for Burning Witches, and a bit more talk about his forthcoming book plus reflections on life today versus life in his twenties and thirties.

Dead Rhetoric: Born to Thrash (Live in Germany) was not necessarily a fully planned release – but a welcome surprise due to the shutdown of live concerts worldwide for the coronavirus pandemic. Tell us how you went through the process of deciding this would be the ideal show to release to the consumers – and how the show was at the Party San Festival overall?

Schmier: When the lockdown came in Germany I was away on holiday, on an island. All of a sudden they said the airlines were going to be shut down, so I knew we had to hurry back to Germany. All the concerts were cancelled, and here I am in paradise. It was a weird situation. I thought about right then and there to do a live album. We aren’t going to have shows this year, let’s see about this Party San Festival show that we recorded. A friend of mine was there with a recording studio and he recorded it for us. It wasn’t planned. It was a COVID-19 release – let’s do something about it, let’s not sit at home and we have this new lineup.

It’s a festival show and 54 minutes, but a best-of Destruction. The new lineup with the new album, the first four-piece lineup for the band in over thirty plus years. Maybe 31 years or so, the fans have been waiting for this four-piece lineup to happen. The reactions have been great. This lineup is a special one, a new time for us, a new drummer and a fantastic second guitarist.

Dead Rhetoric: There are only a few video clips of the show, because it wasn’t even planned to film the entire set, correct?

Schmier: Yes, exactly. The album was recorded for us personally. Nobody recorded for a DVD. It is quite an investment when you do record a DVD, a few thousand dollars for the crew. We are filming for the whole year a Destruction documentary, and the camera team was there recording some backstage footage for us, interviews. They actually recorded the first three songs of the show – so I went to the producer and told them we were going to release a spontaneous live album, can you check to see what you have from the show. He said he would – and they had the first three songs. It captures the energy and the band. A live album, the first time I saw the pictures for “Curse the Gods” I was like wow. The audio all of a sudden sounds much better because you have the picture too. It really opens up the sound. There are no big surprises on the album, there are two brand new songs, but this is an ideal record for the fans of Destruction.

Dead Rhetoric: How would you say the band chemistry is working now that Destruction has expanded back to being a four-piece? Do you believe this opens up new possibilities not just for where the band’s newer material goes, but also adding more depth to some of the older tracks previously handled as a trio?

Schmier: The second guitar is a great thing to have, it opens up more harmonies, more crunch, more energy on stage and we can do double leads again. Also in composing, when we composed as a trio it was a little limiting with only three instruments. With two guitarists there are more possibilities. Also Damir does backing vocals, and it helps with the singing here and there. We have great chemistry, Damir was a good friend of mine before he even joined the band. I’ve known his girlfriend as the guitar player for Burning Witches, which I manage also. The drummer I’ve known for more than twelve years. We are friends and we’ve worked with them before. Hopefully we’ll be able to keep things going for the next ten to twenty years.

Dead Rhetoric: What are your views on the protests and police strife that are happening in the US in the wake of dealing with this pandemic as well? Do you believe this is a bigger symptom of what hasn’t been fully dealt with in our society for a long time?

Schmier: Yes, I’m European so I’m not the right guy to describe what it going on in America. The country itself was built out of issues relating to racism, you know? Europe has a different background with the different wars. In Germany, we try to help each other and in certain ways it’s not about the dollar. I’m not a big Trump fan, I’ve always said that. What he’s doing right now, he finds a way to divide the country. It’s the country of the people, all classes, all races- not the country of this insane guy. He may push himself into the history books, but it hasn’t been a good thing.

Dead Rhetoric: Do you see possible long-term implications in the metal music industry due to this prolonged break from live show activities – and how do you think we will recover from this?

Schmier: I don’t know. The longer we wait and the longer it takes to play live it’s going to be difficult to come back, of course. You may have to get a job as a lot of the bands and the crew people depend on live touring, and they won’t have any money with these long breaks. There are club owners, booking agents, all those people may not be there if this crisis goes on for too long. That’s why here in Europe they are starting to have shows again – Switzerland is starting to have shows, some other countries but you have to have the capacity that’s double because you can only have ½ the clubs filled. There are some experts on Blabbermouth who lied and think it would be next year that the first shows would happen, and that 60% of the people will not go to shows until there is a vaccine. It just makes panic to the people, and that doesn’t happen. We should think positive, this is a scene with a lot of passion and a lot of people who love it. It’s not going to be easy to kill this, most of the people in the scene will come back, and those who have problems will come back later. This is a scene that comes out of the underground.

Dead Rhetoric: You have also delved into the management field with Burning Witches – can you discuss the importance of your role in helping the band move up the ranks in the scene, and how do you feel about the development of their discography in a relatively short time together?

Schmier: First of all I am friends with the guitar player and she started the idea of an all-female band and that they needed some help, asked if I could help them in the beginning. I decided to be their manager and their producer because the problem in the beginning is, when you don’t know shit in my 37 years of business, I know the right people to work with. I could help them right from the start with the best contracts and people through my experience to not make the mistakes that I made. They are young, they are hungry, they have a lot of passion for the music so it’s really fun to work together. In the end they have to grow themselves, it’s hard to keep an all-female band together, one girl left the band again.

Sometimes it’s not so easy to stay together, you have one member who may want to be a mother, it’s the reason why it’s tougher. I try to be there to help them out. I want them to have a good sound. They’ve been sounding better through all three albums. The latest album sounds much better than the last two albums. They’ve had to overcome the attitude of some people thinking heavy metal is a macho game. In the beginning they had a lot of people not taking it seriously. With the success they’ve had, the attitudes are changing. It’s fantastic to see the following they are developing, so many diehard fans that really love the band. It reminds me of the beginning of Destruction when we started. We were so euphoric in the beginning, we had a lot of diehard fans. I can see the same thing happening with the girls, so hopefully we can keep the lineup together.

Dead Rhetoric: How has your outlook on life changed say from your twenties and thirties to today?

Dead Rhetoric: After our last conversation, you were mentioning the work you were doing on a book. Can you update the readers on the progress of this book, and do you have a hopeful time period for its release?

Schmier: I wish I would have made a little more progress. But it’s been a busy last two years. I write for the book when I am on downtime for the holidays. I found out the more dive into this writing thing, the more ideas and stories that come up. It’s a little overwhelming at the moment to write down. I may have to get a ghost writer in at some point to see how we can get everything into some sort of form so it won’t be boring. A lot of cool stories and perspectives to see in the end from the beginning to now. I will finish it when it’s done, it won’t be tomorrow but I’m not getting younger. My memories may disappear at one point, so I’m only going to write one book, and it should be a good one. For sure the major markets will have it in English, Spanish, German, and regionally in several different languages. There are a couple of different companies that are interested.

Dead Rhetoric: What’s next on the agenda for Destruction – obviously Damir released the new Gomorra album, but how are you spending your downtime in the interim without going crazy?

Schmier: I have been part of pushing that Gomorra album. I was a vocal coach in the studio, we help each other out. The last couple of weeks I’ve been riding on my bicycle, we were finally allowed to go out from lockdown in Germany. I also spent time working on the mixing and the mastering of the live album. I’ve been doing several weeks of interviews – I didn’t expect this. I’m thankful to have a great response from the worldwide press regarding this live album. This is the most interviews I’ve done in a long time.