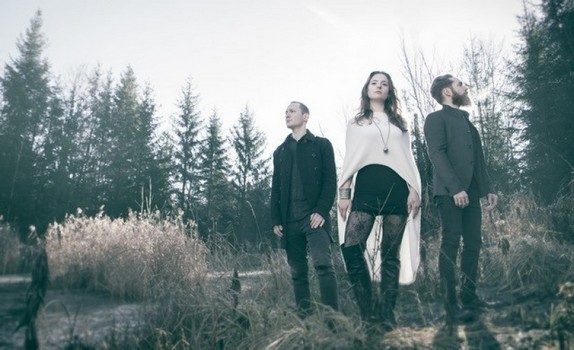 With Cellar Darling’s first release, This is the Sound, the trio of musicians loudly proclaimed that they were willing to do what it takes to provide something unique. Which was entirely successful. One of a few albums in recent memory that truly feels like there was some magic inside it somehow. But how do you follow-up something that was quite well received and beloved? That’s a current question the band faces in the midst of writing the all-important follow-up. In a string of only a few dates in the US and Canada following their ProgPower Festival performance (their first time on American shores post-Eluveitie), we talked to vocalist/hurdy-gurdy player Anna Murphy to get a quick update on their next album, as well as the importance of friendship, storytelling, and philosophy.

Dead Rhetoric: First off, how was ProgPower?

Anna Murphy: It was amazing. We honestly didn’t know what to expect. The crowd is like the name says, it’s progressive and power metal fans. We don’t really do either of those. Some classify us as progressive rock, because we have some elements of it here and there. I don’t really care for genres anyway, I just listen to music. It seemed that the people in the audience shared my sentiment on that. From the first second, they were really into it, and it was amazing for us to witness. We were really blown away! We weren’t expecting such a reception.

Dead Rhetoric: Could you discuss what friendship means to the entire band, as I know the three of you are close?

Murphy: It’s the reason that this band exists in the first place. The [Eluveitie] split wasn’t amicable – it was a really hard split. In the end we stuck by Merlin [Sutter] because he’s our friend. It was a really important and difficult decision for us. In the end, there are a lot of bands that tour and they are just plain professionals, and that can work too. But with a band like ours, there needs to be more than that.

Dead Rhetoric: Do you think it adds another level to the band?

Dead Rhetoric: I saw on your Instagram that you were doing some writing in New York. How’s the next album shaping up?

Murphy: Really good! It’s actually almost completely written. Half of it is recorded. The first single is already mixed & mastered, so yeah, you will hear something really soon.

Dead Rhetoric: For a second I thought you were going to say you would hear something tonight!

Murphy: We were thinking about playing our new single live, but that song is so difficult and long – we would really need to practice it properly. And then of course, there are going to be all of these shitty YouTube videos of it.

Dead Rhetoric: So how do you feel the new songs are shaping up in comparison to your debut?

Murphy: You know, we called our debut This is the Sound, but now, I feel we have found a better sound [laughs]. It’s like the band matured. When we formed the band, it was really chaotic. We needed a band, we needed music, and we didn’t decide if we were going to be a folk metal band or not going to be a folk metal band. We just did something. You can hear that – the first album is very eclectic. It goes in a metal direction, but some of it is just rock and some has folk in it. Now I think we’ve kind of decided to go more progressive and epic, with even more storytelling. It’s going to be a concept album, with a lyrical concept that tells one story. There’s going to be more of everything. There’s distorted hurdy-gurdy and all kinds of stuff.

Dead Rhetoric: You mentioned the storytelling aspect. I’ve read other interviews where you talk about wanting to tell new types of stories. What role do you see it as having in within the context of the band?

Murphy: The main reason for me wanting to tell new stories is because I’m a very creative person. I like to invent things. I’m constantly seeing stuff and daydreaming. A lot of people have told the old stories. I think folk tales, myths, and legends are amazing, but we know them. I want to create new stories that are told with the same type of feeling. Stories that you can make up your own thing – you can see yourself in those stories and interpret them how you want. You can go even further and just see yourself in all of them, but in a different way. That’s basically what I want to do, and it happens naturally as well. I just start writing and a story pops into my head. Sometimes they are stories you learn a lesson from, like Aesop’s Fables or something like that. I like that, I’ve always enjoyed making things up like that.

Dead Rhetoric: With it being just the three of you in the band, are there things that are more challenging, or easier for you to do?

Murphy: A lot of it is easier because we are all on the same page. Not with everything obviously, there is conflict, but we want the same things and we can talk about them because we are good friends. I was in an 8-piece band, as you know, and it was difficult. In an 8-piece band, there are going to be groups and theories, and talking behind each other’s backs. Things like that happen quicker when there are more people involved. In a trio, you aren’t going to talk shit between the two of you, and there’s one person left, that would just be weird [laughs]. That also leads to problems. It’s just the three of us, we are constantly stuck next to each other, so there’s going to be conflict and hurt feelings. But you have to be a grown-up and speak your mind. We are still working on that, we have to learn it. It’s like you have to take care of a relationship, you have to do that in a band as well.

Dead Rhetoric: Does it make it easier to be blunt when you are writing, and being able to say, “No, that sucks?”

Murphy: We’ve been very honest with each other on that. I love writing together and having this real band thing, instead of having one person telling everyone what to play. But there are going to be parts that you would have done differently, or parts you don’t like that much, but that’s how it’s going to be. Compromise is everything.

Dead Rhetoric: I found another interview that the band had done which had a ton of philosophy talk. Do you feel there’s a certain component within Cellar Darling with philosophy in either the lyrics or music?

Murphy: I think more than it used to. It has a bit more space in my life now than it did during Eluveitie times. It’s because I am kind of rediscovering myself after years of not really knowing what I am doing, in a way. I actually wanted to study philosophy – I didn’t want to become a musician at all, I wanted to be a real academic and I loved reading and things like that. But just like that [snaps fingers], I dropped out of school and became a touring musician when I was sixteen. This is starting to come back a bit, and I’m wondering if I should do a part-time online university, because I am really becoming more interested in philosophy again and reading books. It’s definitely a topic within our lyrics, which are very blunt, because it’s 3-minutes, so you can’t really elaborate that much.

Dead Rhetoric: You have an interest in philosophy, what are your other interests and hobbies outside of the band?

Murphy: I love hiking. I do it whenever I can. I only truly feel good if I’m on a mountain. I’m at home there. I love reading, I love swimming. It’s very important for me to have lakes and mountains. Apart from that, I’m pretty normal when it comes to free time. Sometimes I like moving around, sometimes I like drinking with friends, and sometimes I like stuffing my face in front of Netflix. It always depends.

Dead Rhetoric: You’ve done some recording with other bands. What do you like about being able to step away from the songwriting and just be involved in the studio?

Murphy: I love it. When I’m having a bad period as a musician, I always think to myself that I should just be a sound engineer. I always like doing that. It’s a really rewarding job. I learned it the same way I learned music, by just starting to do it. So there’s still a lot for me to learn but that’s the great thing about that job. You never stop learning. For me, it’s the perfect thing, jumping between being a musician and a sound engineer. Unfortunately, both of those jobs are very hard in terms of getting by [financially], so I didn’t make it easy for myself but they are fulfilling.

Dead Rhetoric: Are there any more plans for your solo work, outside of Cellar Darling?

Murphy: I’m going to write a new album – I don’t know when, but I really hope to do it next year. It’s been a while. People are forgetting it’s there.

Dead Rhetoric: There are two more dates before you fly back to Europe. Are the plans right now just to continue with the new album?