Catching Up With Nightrage 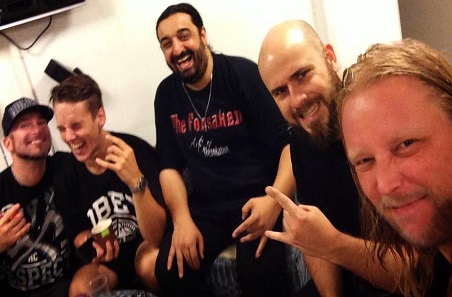 Since their 2003 Sweet Vengeance debut, Nightrage have come to embody melodic death metal consistency, releasing an album (all of distinct quality, mind you) every other year, but 2013 marks a sea of change for the band. Their deal with Germany’s Lifeforce Records expired, and vocalist Antony Hämäläinen left to focus on other projects, leaving mainman Marios Iliopoulos in an odd, but exciting state of transition.

“Yeah, that feels new for us since our deal with Lifeforce expired, we had signed for three albums and we made all of them,” he begins. ”Status now is that we are looking for a new label home, there’s been some interest from a few labels, but we want to find the right one for us that will make the next release something more special and push it on the right direction.”

One thing Nightrage has working in their favor is their productivity and willingness to work, something (as noted above) that has made them one of the scene’s more reliable bands of their ilk. The guitarist agrees with our assessment that Nightrage is a low-maintenance band. (As he should.)

“We understand the business and also we want to have a healthy relationship with our label, so as long as they are doing their job well, we are not the type of band that will sit there waiting and daydreaming about stuff. We know that we need to work really hard as well, to make the best of promoting our music, and working effectively until we reach all the goals that we have set from the start. So our expectations are pretty low-maintenance, and as you have said before, we want the best from both sides and we are not asking for crazy stuff.”

As for Hämäläinen, the singer’s residence in the United States posed a regular problem, something that Iliopoulos said was one of the contributing factors to the vocalist eventually leaving the band. “Yeah that was one of the main factors and also the fact that this didn’t work anymore,” he admits. “It was really difficult for us to have to deal with members living so far away, and even if I have tried to make it work, in the end that was a pain in the ass for the band.

“We had lost contact and also I felt that he was not the right guy for the band anymore,” he continues. “So I think it’s for the best for us that he is out of Nightrage now. Honestly, I’m relieved that he is out. Plus there was more stuff that has happened on a more personal level that I don’t think is right to discuss here, so in the end, I wish him the best in what he does.”

Presently, Ronnie Nyman of Always War is handling vocal duties (“I see a lot of potential in this guy,” enthuses Iliopoulos), but the marquee pickup is one Jesper Stromblad of In Flames fame. Stromblad – who left In Flames in 2009 to deal with alcohol issues – has been filling in for Nightrage since the summer, lending his considerable knowledge and skills of melodic death metal to the band’s already-formidable sound.

“Well, that is super cool and the connection came through Jimmie [Strimmel, ex-Nightrage singer], says Iliopoulos. “But I knew Jesper anyway many years now – but we had lost contact – since this guy helped me back in the day when I first came in Sweden and offered me hospitality and stuff. We are looking forward to more shows with Jesper he is one of the icons of melodic death metal and for us, it’s a great honor to have him with us.”

“Yeah, we are up for it and he seems to like the band a lot as well,” states Iliopoulos.

It was approximately ten years ago when the band’s Sweet Vengeance debut descended upon the scene, a veritable melodic death metal “all-star” album that featured the likes of shredder Gus G., ex-At the Gates throat Tomas Lindberg, The Haunted drummer Per Moeller Jensen, and guest clean vocals from Evergrey singer Tom Englund. Sure, these names speak volume and let instance credence to the album, but it’s foundation was rooted in Iliopoulos’ desire to erase the bad taste in his mouth when he split from his previous band, Exhumation.

“I still remember the passion and hunger that I had and all the hardships that I had to face to make this album a reality,” he recalls. “Those kind of things making you appreciate more and more why you are doing this, and always making you more humble and put your feet on the ground. I still remember the happiness that I felt when we released the first album, and all the great response that we got afterwards. It was a dream come true for me and all the hard work that I have done both on a personal and musical level.”

The band recently completed a run of Asian dates, so work will turn to completing the sixth Nightrage effort, which according to the guitarist, is starting to take shape.

“We have a bunch of songs down, but we need to work more to be able to tell you what the outcome will be, for now only I can tell you is that it’s pure Nightrage-style songs with a twist,” closes Iliopoulos. “I can’t wait to try Ronnie doing some vocals and for Marcus [Rosell] to add his drums, so we have bigger and more clearer picture of the songs.

“We want to show to the world that we are still alive and well, and nothing can stop us continue doing what we are doing.”