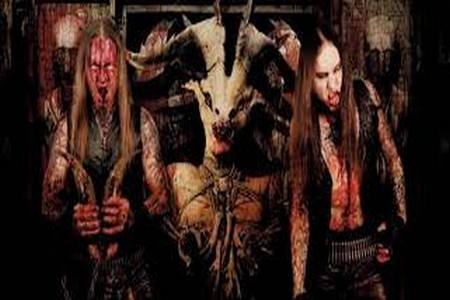 Dead Rhetoric: “Legions of Destruction” features guest musicians (Glen Benton and Attila). How’d the decision to use them come about?

Helmuth: This idea was stuck in my head for a long time. It was just to please my ego, hahahrrr. Truly, it’s really an honor to me. I appreciate their vocal styles and what their work brought to the extreme metal community. I wanted to have those two guys, not just any dudes from some other bands. My plan was either them or fuck the plan. I think I first asked Attila about it in 2007, as we recorded Bondage Goat Zombie. With Deicide we did two big tours, one in the US one we conquered and devastated Europe. And Glen liked the idea, which was great to me. Finally it worked out. Both bands in the beginning were very important and inspiring to Belphegor. Once again, It’s an honor that they put their magick on this track. I think it was Metal Rules that was talking about the “Three Tenors From Hell,” since I’m also doing vox on this track. What a grand remark!

Dead Rhetoric: What do you feel that producer Erik Rutan brought to Conjuring The Dead?

Helmuth: As I started creating the new sound collages I had a goal. A direct, aggressive death metal album with the typical Belphegor aspects. I wanted to put some of the more epic elements aside and concentrate on dynamics and intensity, to arrange all songs more to the point. That’s why we decided for Erik Rutan as producer and recorded in Florida. I always wanted to have that US brutal sound for a Belphegor LP, but I never thought it would happen.

The collaboration was just awesome, way better than I ever expected. He brought some ideas here and there, and motivated us to track ultra tight performances. My guitars never sounded that precise on a Belphegor album. If you turn the volume all the way up, it’s as if the band is in the same room with you and blasting the shit outta hell.

Dead Rhetoric: You went back to Seth Siro Anton for the artwork this time. What was your aim for the cover?

Helmuth: I enjoy his art style and working with him. I’m damn proud of the new artwork. Seth did an outstanding job. Always great teamwork with him. This is a conceptual depiction of the world of terror we actually do live in. It’s about how I see the human race nowadays, how we destroy life/nature, poison ourselves in a variety of ways for many reasons. We work hard to fuck up everything and dig our own graves and destroy the earth in the name of greed and might. On top as always, Anti-god and Anti-life poems. People that support Belphegor find the lyric sheets in the booklet of the physical Cd. I encourage them to form their own interpretations, too.

Dead Rhetoric: You’ve released a teaser for the upcoming “Conjuring the Dead” video. What can we look forward to when the video releases?

Helmuth: The new video clip is with Makani Terror, a known fetish/tattoo model from Germany. The director was a guy from Austria, Walter Fanninger. It has everything Belphegor represents! Some sheep call it cliche…I call it metal! I’m very pleased with the result and feedback so far has been great! It’s amazing if people dig what we’re doing but thats not the most important thing to me. You can’t please everyone. I try to please myself first and do what the fuck I want to do; no restrictions in the Belphegor bunker.

At the end the musick has absolute priority, and it’s what counts at the end. Belphegor is my vision, I put so much hard work into the band, lets call it a “Pactum In Aternum!”

Dead Rhetoric: There’s always been a sexual aspect to the lyrics of Belphegor, care to share some examples from Conjuring The Dead?

Helmuth: We have celebrated perversion and blasphemy since the end of 1992. It will not change, man. The sheep can cry and go to the devil, haharrr. Belphegor still is consistent and ready and loaded. I don’t wanna talk to much about this content anymore, there are so many wastes of oxygen around who misinterpret all that stuff, or just are too stupid to understand it. Our die-hard supporters that buy our physical album have the lyrics in the booklet, I encourage them to decide how they feel about it.

Dead Rhetoric: With the release of Conjuring The Dead, what’s lined up for Belphegor for the remainder of 2014?

Helmuth: In Europe we will concentrate on festivals for 2014-2015. We are doing approximately 20 open air indoor festivals this year. Norway, Sweden, Jakarta, Ukraine, France, Germania are already successfully conquered. There is a lot coming on the map like Japan, China, South Africa. It’s always great to march into new territories, big challenges. At the end of the year, a festival tour through South America. Each BELPHEGOR concert is a surprise, we are known for elaborate stage rituals, and celebrate high speed diabolical death musick.

We always concentrate on our fast songs, and fire them in the audience with uttermost precision and brutality. After 8 North American tours, we return for our ninth raid and come as headliners. I hope people come out to the events, support the band’s legacy, and enjoy metal. The last two North American tours we did were in 2011. So it’s about time to return. It will be a pleasure to conquer the states again. Join the Belphegor rituals and go to hell with us.