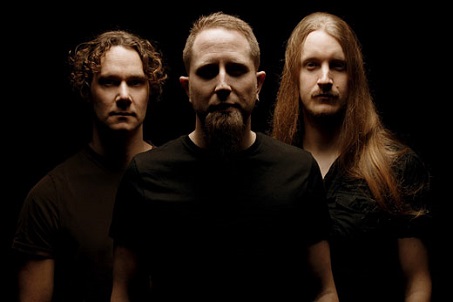 Fact: The various spin-off bands associated with Katatonia have yet to disappoint. We’ve long championed the likes of Bloodbath, the sadly-defunct Diabolical Masquerade, and October Tide in these pages, the result of each producing sounds of substance that veer off in directions Katatonia simply cannot. Indeed this sort of “sonic umbrella” cultivated by Katatonia covers a broad spectrum, ranging from feral Swedish DM (Bloodbath) to unbelievably dark melodic death metal (October Tide), and eerie/symphonic black metal (Diabolical Masquerade). The trio is now joined by a fourth band, Aoria, who comprise of Swarm of the Sun guitarist/vocalist Erik Nilsson, Katatonia bassist Niklas Sandin, and October Tide drummer Robin Bergh.

The band holds up the atmospheric bargain of the spectrum, pulling a stellar debut EP by way of The Constant. It bobs and weaves like a more focused Tool, with stealth, dreary melodies along with Nilsson’s very formidable vocal approach topping things off. Inasmuch as we throw out comparisons, Aoria exists very much in their own sphere, with The Constant providing a glimpse into the band’s unlimited potential. Here’s Nilsson, chatting it up with Blistering…

Blistering.com: here’s tons of connections in and around the Katatonia/October Tide camp(s). How did the three of you come to be?

Erik Nilsson: I met Robin Bergh in 2006 when we were looking for a new drummer for Aoria. We recorded our final demo I Know You Came Here To Erase Me and did a couple of live shows together before the band, two years later, decided to take a break for an indefinite period. Robin had been working as a drum tech for Katatonia for some years around that time, and I believe that’s how he came to join October Tide after we parted. I decided to focus entirely on A Swarm of the Sun, but since Robin and I had the same idea on where we wanted to go with Aoria, we agreed early on that when we felt ready, we were to pick where we left off and release the album. A couple of years later, we decided that it was time to give it a shot as just the two of us, and see where it would go from there. Right before we were to entered the studio, we contacted Niklas Sandin to see if he was interested in contributing with the bass on the album. Robin knew Niklas from a former band they both played in, and I believe he’d had Niklas in mind pretty much from the start.

Blistering.com: With Niklas on the road quite a bit with Katatonia, how hard was it to get The Constant assembled?

Nilsson: We pre-produced the album with just drums and guitars before entering the studio. It was only after we’d actually recorded the final drums for the album that Niklas and Robin arranged the bass. Niklas is extremely skilled and grasped the concept really quickly, adding his own personal touch to our songs. It didn’t take long to get the foundation of the album recorded. It was mostly a matter of making sure Niklas was available and in the country at the time.

Blistering.com: Are there any plans for live dates? Or, have you played live at all yet?

Nilsson: We’ve played one live show so far since the release of the album, with the additional support of Fredrik Norrman and Emil Alstermark from October Tide. We would certainly love to play more, but since all of us also have other bands keeping us busy it’s not possible for us to plan any tours right at the moment. We’ll just have to see what happens and take it from there, but if all goes well there will hopefully be some opportunities to see us outside of Sweden for a couple of shows.

Blistering.com: Many seem to overlook metal styles outside of Stockholm and Gothenburg, but the scenes outside of those two cities are as strong as ever. Do you have a strong connection with your fellow Swedish musicians?

Nilsson: Yeah, there are many great artists from Sweden that I admire. Regarding my own connections, there are many common denominators among the contributors and members of the bands I’ve been involved with, and hopefully that list will continue to grow. I’m currently working on the third album by A Swarm of the Sun, where will try to make use of that to an even greater degree. Creativity is a strong driving force in me, and I tend to seek out other enthusiasts around me. I’m very fortunate to have found so many.

Blistering.com: Based on association alone, many will instantly think you’re some type of Katatonia clone, but you’re nowhere near close. How cognizant are you of who you might be compared to?

Nilsson: From what we’ve heard, people seem to find many different influences in our music, which in itself feels fantastic. I mean, that tells me that we might have created something fairly unique, depending on which perspective you see it from. I don’t bother much trying to fit Aoria into any exact definition of genre. We work with what we got. But of course, there is always inspiration behind everything you create, and I believe people find pieces of elements in our music that in one or another way has been an influence, and that’s not at all a bad thing. And for those that haven’t heard us yet, comparisons can be a great way to catch interest. At least that’s often how I tend to discover new artists myself.

Blistering.com: Describe the writing process for The Constant. Was it collaborative?

Nilsson: I had written the songs from the demos that were re-recorded for the album, and I composed the rest of the material right before or right after the band parted. Since we knew we wouldn’t be able to rehearse any of the songs before entering the studio, we decided to pre-produce the arrangements for the entire album, which was more of a collaborative process. This was especially a great way for Robin work on the drum arrangements before all the remaining instruments were recorded. The pre-production also gave us some room to experiment with additional instruments and arrangements before the final studio recording.

Blistering.com: In fact, you elude categorization altogether, but the melodies and darkness are two of the resounding traits. What’s the best way to describe you?

Nilsson: Those traits, as you say, describe the music quite good. I do find the contrast between beautiful, epic soundscapes and darker content very enticing, and those are certainly strong elements in our music. I’m not afraid to express emotions through music at a personal, almost overwhelming level, and I believe this sincerity is something that defines our music quite well.

Blistering.com: “A Slow Moving Storm” is an instant highlight and probably best represents Aoria’s sound. What’s the genesis of this song?

Nilsson: If The Constant was a film, “A Slow Moving Storm” would be the theme for it, so I’m really glad to hear you say this. The overall mood and contrasts between the melodies and dark undertones in the song is something we wanted to be heard throughout the entire album, like a common thread, all the way to the end. When writing music, I tend to often go near the border to over-dramatic and epic soundscapes, and “A Slow Moving Storm” is a vent, almost like an outbreak for all the feelings of being consumed by desperation, frustration and finally being able to release, without holding anything back.

Blistering.com: The vocals are definitely one of the album’s most interesting aspects. You use a variety of voices, but they’re always emotional and melodic. How did you develop your technique, and is it hard to put vocals to music like Aoria’s?

Nilsson: I’m flattered! I would like to believe my voice has been the same for as long as I can remember, but I guess it’s something that has matured with each band and musical project I’ve been part of, until right now where it feels very natural to me, and most of all sincere. To me, sincerity is most important because all the music I love is about expressing emotions on a personal level. Technicalities or instrument virtuosos is of no real interest to me. I believe it’s entirely about the song as a whole, and while melodies are often key elements in my music, either in the form of a voice or an instrument, they would never be the same outside of their context.

Blistering.com: You run and operate your own studio. Do you record many bands? Do you hope to make it a regular gig?

Nilsson: Version Studio was initially started as a recording studio, thus the name, but I now run the company primarily as an independent record label. The studio was intended to be much more of a regular gig when I started it, but I have to admit that writing and producing music attracts me much more than the technical aspects of audio-engineering. Two years ago I decided to merge the studio and nowadays I share it with my good friend Michael Nordström as a part of Garaget Studio. I do record other bands from time to time, but that’s more the exception than the rule. Currently I’m recording the debut album by Swedish black metal act Astrophobos, which is to be released on Abyss Records, and will begin recording the next album, The Rifts, by A Swarm of the Sun early next year.

Nilsson: Up until now we’ve been focusing entirely on releasing The Constant, putting our other projects to the side for a while. It’s been quite the intense period for us, but finally being able to complete what we had left unfinished feels satisfying behind all belief. Robin has just finished a new album with October Tide, Niklas just left for a European tour with Katatonia, and I’m currently in the middle of the pre-production for the upcoming A Swarm of the Sun album, so I guess the first couple of months of 2013 are booked. As for Aoria, we’d love to get out and do some more live shows, and maybe even start writing on a second album.