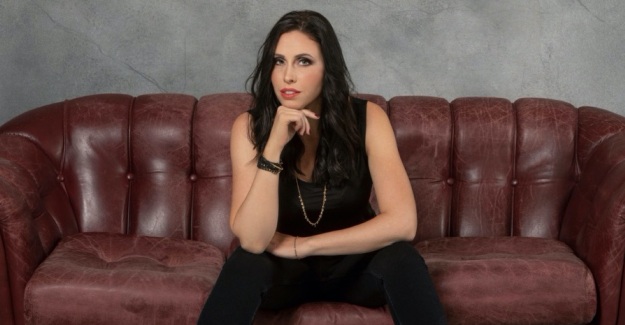 Enjoying the exploration of her melodic rock/AOR tastes, The Murder of My Sweet singer Angelica Rylin returns with her second solo album All I Am. Aligning with fellow member Daniel Flores and other musicians and songwriters, this effort contains a bit more of a modern rock slant to things, while still allowing Angelica’s multi-octave range and abilities to lift the melodies to ensure the strongest hooks and memorable tracks. We spoke with Angelica recently to learn more about the seven year gap between solo releases, the work that Daniel does to ensure an even stronger, more cohesive record, the challenges of shooting a video during COVID and how that worked, as well as learning about the development of her voice over the years and her love of cooking/baking.

Dead Rhetoric: All I Am is the second Angelica solo album – your follow-up to Thrive in 2013. Where do you see the major differences in this record compared to your debut – and were there specific reasons why you waited seven years between releases?

Angelica Rylin: Let’s start with the second part, why it took seven years. I’m very active with my other band The Murder of My Sweet, that has always been my main focus. We have released several albums during this time, we are on album five with that, so it’s much to do with that recently. Then I had a conversation with Frontiers and we discussed doing another solo album. It was an interesting thought, something I wanted to do for some time but didn’t really have the time to do it. It took some time, and with The Murder of My Sweet I’m very involved in all aspects, the songwriting, the recording, the mixing and everything. For the first solo album and this one, I have been working with a bunch of very talented songwriters. We took some time to find the right type of songs- I can’t say we have been spending seven years looking for songs.

We decided it took us about half a year to find the right songs. It’s a fun way to express myself musically, and it’s a different type of style from The Murder of My Sweet and my solo music. The difference between the two albums, with Thrive I was experimenting with music I grew up with, music that I listened to with my parents, 80’s AOR and music like that. For this album, we have gone in a slightly more modern direction perhaps. Both albums express who I am, but this album is a bit more mature. I’ve grown up as a person and I’m more comfortable in myself, composing and the music writing as well. It’s me, but different versions of me, these two albums.

Dead Rhetoric: Do you gain a certain level of comfort having fellow The Murder of My Sweet bandmate Daniel Flores as a keyboardist, drummer, and producer for this record? What do you believe he brings to the table to make the record distinct and special to you?

Rylin: Daniel is sort of my lifeline and my safe harbor. I trust him with my life, and with my album of course. We work very well together. I have so much faith in his producing and his arranging, even his songwriting. I wouldn’t want to work with another producer, because I love his sound so much. It’s a certainty with him. He brings his own style, his own way of listening to the demos that we get. He conforms them and lifts them up to another level – puts his special signature on it that I really enjoy and like.

Dead Rhetoric: Tell us about the video shoot for “Calling” – and was it an easy decision to pick this song specifically for a visual clip?

Rylin: “Calling” was a song that stuck with me right from the beginning. As soon as I heard it, I thought this is the one. When you start the whole process of recording and finishing everything, you find something in all the songs that you really like. “Calling” was one song I always came back to. When we discussed the single, this was my suggestion – Frontiers and Daniel of course agreed. Mostly it comes down to the type of song that you are singing in your head when you stop listening to the album. This was the one for me at least.

The video shoot…we are in a very special time at the moment with COVID and everything. I waited as long as possible to gather a team to do the video shoot. You have to be very careful when you are bringing people together in a room. One of the reasons for shooting the video outside was the safety measurement part of it. When the video shoot actually happened, it was the hottest day of the summer! It was 30 or 35 degrees Celsius, let me check in Fahrenheit for you… it was 90 degrees or so. It was pretty hot and scorching outside. It was fun, a very good experience. We were a pretty small team, and we brought a lot of water and soda to stay hydrated during the day. We shot in three or four different locations, and we had a great time.

Dead Rhetoric: What do you enjoy most about performing in the melodic rock/ AOR style with your solo material? Was it a specific type of music that always captivated you even in your youth?

Rylin: It is something with me that really hits home. It is something that makes you tingle, makes you feel good. Something about that era of that music really appeals to me. It’s a little bit different from most modern music released today, I think.

Dead Rhetoric: Do you find it challenging to appeal to younger audiences in a genre that was best known for its work during the 1980’s and early 90’s, when major media and commercial radio would be playing these styles in regular rotation?

Rylin: Absolutely. I think that’s true. To get airtime for this type of music is a little bit difficult as well. You just have to see how an album hits home. That’s why the new album isn’t necessarily as much 80’s AOR and more in a modern rock style. It is difficult – at the end it comes down to if it’s a good song or not, if you like the song. People need to give it a try, radio stations need to give it airtime for people to hear it. Mainly it’s streaming on Spotify platforms. If you get the word out, you can get people to listen to it, and people will share it, it could help.

Dead Rhetoric: How do you see your personal growth as a vocalist from the start of The Murder of My Sweet to today? Do you believe there are certain areas or strengths you’ve gained as far as your voice, your range, and how you carry yourself?

Rylin: I think I have developed a bit more sustainable way of singing. I have learned a technique that is not harmful for my vocal cords, and I can sing for a very long time without getting tired or getting strained. That has come with age and finding the right vocal coach to sing in a healthy way, to not ruin your voice. On a personal note, I was a little bit scared about how my voice would change when I had a baby. I became a mother two and a half years ago, being pregnant and carrying a child that is something that could perpetually change or affect your voice with the change in hormones. To be honest, I feel stronger than ever, I’m very comfortable and relaxed in my voice.

Dead Rhetoric: What are your thoughts on your music career with The Murder of My Sweet – can you think of some specific highlights, and do you feel content with your status within the scene?

Rylin: I am extremely happy that we are still releasing albums and that people are asking us for more music. It’s the main reason we are still recording, because we still have an active fanbase out there. It’s a very special year, this year- we can’t do any live gigs or touring. I hope for the future we can go out on the road again and meet our audience live. Two of the most epic shows we have done, Wacken Open Air- it was amazing to do that, and another festival we did in Bahn early in our career.

Dead Rhetoric: What are some specific hobbies or activities you like to participate in when you have the free time to do so away from music?

Rylin: I was a dancer, but I haven’t been active in that for many years. Another passion of mine is cooking and baking. I find that interesting, I love to watch cooking shows. I can’t wait for my son to grow up a little more and he will be trying stuff with me, and we can experiment together with meals and desserts.

Dead Rhetoric: What are the biggest lessons you’ve learned when it comes to your music career? How do you handle when setbacks or failures come up in your life, and how do you breakthrough to overcome and become stronger as a person?

Rylin: My biggest lessons are listen to your heart and believe in yourself. Trust in the people that are closest around you. Be true to yourself, it’s okay to aim high and fail and stumble along the way, as long as you are true to yourself and what decisions you make. I think that’s most important, one day when you look back on your career or on your life it’s important to see things there that you are proud of. It may be small things or big things, it doesn’t really matter as long as they are true to you.

Dead Rhetoric: What do you consider left on your bucket list to accomplish – either in terms of music or personal goals?

Rylin: I would like to tour in both America and Japan. Those two big markets are where we haven’t been with the band yet, and it would be amazing to have that experience.

Dead Rhetoric: What’s on the horizon for you over the next year or two related to music – either in the solo realm or with The Murder of My Sweet?

Rylin: We are at the moment working on a new The Murder of My Sweet album, we are hopeful to finish that sometime next year. I don’t see an end to working on music anytime soon. It’s very hard to predict going forward in this pandemic, how long it will stay with us and what we can do in the meantime. At the same time, we live in a very digital age and it is possible to release albums and send them out. So the sky is the limit! 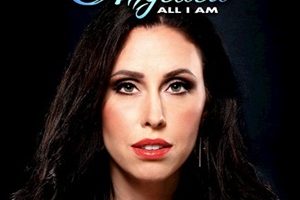 Angelica – All I Am (Frontiers Music)