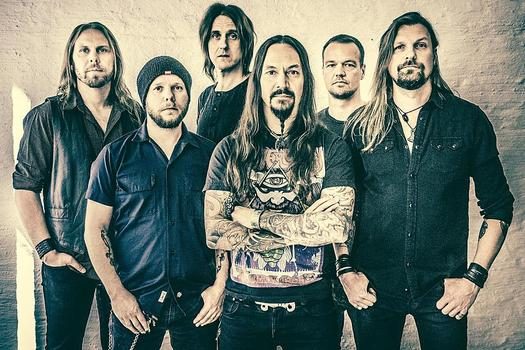 Ever the consistent bunch in more recent years, Amorphis released what might be their strongest effort to date in this last spring’s Queen of Time. A decadent blend of prog, folk, death, and more, there’s more than sufficient melodies and masterful tones to dig into in the band’s thirteenth release. It also saw the return of bassist Olli-Pekka Laine, who had left the band almost 18 years ago after the release of Tuonela. With a successful North American run last year, the band quickly came back across the Atlantic with a co-headlining run with Dark Tranquillity. We caught up with Laine on the last day of the tour in Clifton Park, NY to talk about his return, how things have changed over the years, and his thoughts on Queen of Time.

Dead Rhetoric: So what was it like to jump back into Amorphis after all these years?

Olli-Pekka Laine: I had settled down with a decent job and a family, but it was nostalgic and it happened naturally. There was a lot emotion involved in the reunion, but after all it was the natural thing to do. It felt like being back home after about 18 years gone. But it didn’t feel like that when we first rehearsed and we played the first gigs. But the guys have been doing this for 30 years, and I hadn’t been playing that much in between. I had to learn how to play with ear monitors and things like that – it took me about 6 months to adapt fully to being in the band. Now the honeymoon is over and it’s just how it used to be. On a personal level, things are better and the music is much better than it used to be in the late ‘90s. Plus there’s more people in the audience. It’s been good and I’m enjoying it.

Dead Rhetoric: This is your first time back in the States with them, how do you think the tour went overall?

Laine: I think it’s been a good tour. It’s a good package. 4 bands – I’ve always dug Moonspell and Dark Tranquillity, and I know the guys from Omnium Gatherum and we are sharing a bus with them. The audiences have been good, and there’s been a few sold out shows. It’s been interesting, because I toured the US with Barren Earth about 7 years ago and it’s a lot of the same places and people in the audiences, so it’s been good to be back.

Dead Rhetoric: So is Amorphis the priority now, as opposed to Barren Earth?

Laine: It has to be because I’ve sort of quit my job and have to make a living off of music. With Barren Earth it would have been really difficult to do that and make decent money to pay the bills with. The other guys are really busy in the band so we can’t tour that much. But in Amorphis, everyone is determined to give 100% to the band, so I have to say that they are currently my priority for practical reasons, and many other reasons as well. But I can’t complain – the music isn’t that far from each other with Barren Earth and Amorphis. It’s hard to say what will happen with Barren Earth; we only have one gig scheduled for next year so far, and I haven’t seen the guys for a while. I think we will discuss that matter in the near future.

Dead Rhetoric: With Queen of Time, how do you feel that compared to what you were doing in Amorphis in the earlier days?

Laine: My last album was Tuonela, and there are some elements that could be on that album as well. But then I would say that Tuonela was more of a commercial album in our scale. Queen of Time is commercial as well, but it has more growling and more death metal riffs here and there. I’d say it’s a mixture between Tales from the Thousand Lakes, Elegy, and Tuonela albums. But with something new added as well. I enjoy it much more than I did with Tuonela, which is not bad, but this is more up my alley. I think the band has been heading in a good direction with these last three albums so I hope that’s the way we will continue to head in the future as well.

Dead Rhetoric: Tuonela was kind of a jump from Elegy back then. What do you remember about how things were going when you moving towards that album?

Laine: We started to listen to lots of different kinds of the music in the ‘90s and it wasn’t 100% me with the changes. I didn’t feel comfortable playing the songs of Tuonela live, for example. I would have been sticking to the folk metal stuff myself. But when I listen to it now, I think it’s quite a good album. It’s not one of our best, but it’s definitely not the worst one either. The production is really good. Simon [Efemey] did a good job with it. I think Pasi [Koskinen] was singing very well on that album. It’s hard to say – I have some issues with that album and era, and that’s why I originally left the band. Now since the band has gone back to the roots in a way, it’s easier to look back on it.

Dead Rhetoric: Given the definition of the word ‘amorphous,’ do you feel that the band name has been fitting?

Laine: Yeah, totally! I can tell you that it didn’t happen on purpose. It was just a natural development. When we started the band, we listened to prog rock but we enjoyed playing death metal. But then we realized we could do different musical styles and we wanted to explore music and make some investigations. We didn’t have anything to lose. We hadn’t really been touring at all after The Karelian Isthmus, and a lot of other bands had started to flirt with rock music and things like that. We decided that we could play the music that we liked, but it was a fortunate thing that we managed to mix death metal and progressive rock that well. It wasn’t an accident, but it happened naturally. But that’s how good things happen. That’s what the band has been doing ever since.

Far from the Sun and Am Universum – there was a reason for those albums as well. I think the band learned something from those albums. The band had to go there, to get back. But it’s hard to say where we will go from here. It would be quite easy to continue in the way of Under the Red Cloud and Queen of Time. I’d like to experiment a little at some point but it’s hard to say what it would be. We have very wide musical tastes to look at. Maybe some acoustic stuff, or even more brutal death metal. Or something in between, or both. Let’s see – we’ll let things flow naturally like we always have.

Dead Rhetoric: How do you feel that Amorphis have changed as people, from the time you left the band to the point you jumped back in?

Laine: Of course, we have all matured…we are like adults now [laughs]. We keep more space – we don’t require everyone to be involved in everything all the time. For example, there was a huge pressure to party after the show back in the day, but now I can go to the bunk and watch Ozark’s latest episode and the other guys are totally okay with it. They don’t feel like I’m isolating myself from them. And that goes for everyone – we do what we like. Musical tastes have changed as well, and we aren’t as strict about our own opinions like we used to be. We tended to be a bit stubborn when it came to music, and that’s why we split in the first place. Now I can tolerate things that I don’t like 100%, and so do the other guys, and we respect each other’s opinions more.

The line-up is different – for me, this is the best line-up of Amorphis ever. Tomi [Koivusaari] is a great vocalist and Santeri [Kallio] is doing an amazing job on keyboards and composing. We have a decent production nowadays. That was a problem in the ‘90s, especially in Finland. There weren’t any producers so we had to go to Sweden. Now we are working with a Swedish guy again, but it’s easier too because Jens [Bogran] is a really reliable guy and a great producer. We are sitting in a very good position currently and I’m really happy with it. I’m looking forward to the upcoming years with the band.