Altar of Plagues – Burn It Down 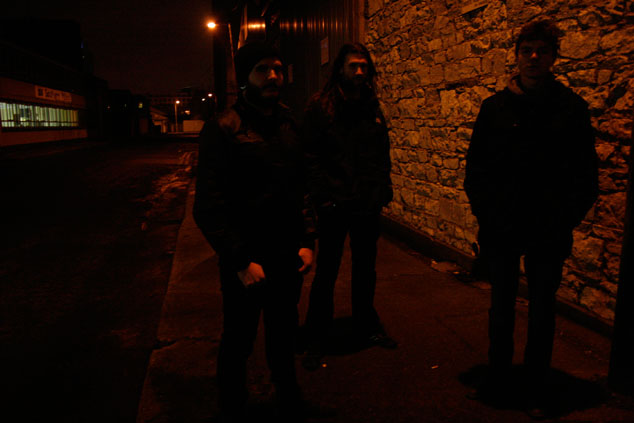 Altars of Plagues…man, they hit it. They hit it like Isis did when Panopticon emerged in 2004 or when Neurosis started blowing minds in the mid-90’s. That huge wall of sound, like a sonic tsunami of sorts…it’s astonishing what three lads from Ireland can do. Yet here they are with White Tomb, a sure-fire contender for album of the year and we’re only in April.

As Blistering quickly found out, Altar of Plagues’ agenda of espousing the imminent destruction of planet earth is real. It’s not forced. It’s not contrived. Rather, it’s the voice of a band who appears to demonstrate genuine concern in their music, and on hulking songs like “As A Womb” and “As A Furnace,” the bar for metalgaze circa 2009 both sonically and in lyrical scope has been raised.

The band is currently up in a lot of people’s faces, which is great. Attribute that to solid rep of label Profound Lore and the broad appeal this band has. We caught up with guitarist/vocalist/synth player James O’Ceallaigh for a broad discussion on the new album, the band’s sonic boom, and those pesky global issues…

Blistering.com: While I enjoyed the Sol EP, White Tomb has totally destroyed, annihilated, and mesmerized me. What were you aiming for from the onset?

James O’Ceallaigh: The entire album came together very naturally and I think the only aim was to create something we were all completely satisfied with. Composition is an extremely slow process for us and we will spend as much time planning the tracks on paper as we will using instruments. The concept and mood of the album takes shape while we are writing and we will not finalise the music until all lyrics have been written so as it may be changed to suit the themes if necessary.

As always, we wanted the release to work as an entire piece and not just a collection of songs. This allows us to keep a consistent mood throughout the recording and allows it to evolve in a natural way.

Blistering.com At only four songs, I’m surprised as to how layered and deep the songs are. Was the intention to make the album this cinematic?

O’Ceallaigh: Again, it all seemed to happen quite naturally. We knew before recording that we would need the record to sound both dense and vast. We put a great deal of thought into choosing whom we would record this with, as we wanted a sound that felt characteristic of the moods its presents and not a generic digital product. Whilst we enjoy barely audible garage recordings, this was not the route to go on this either, so we wanted to work with an engineer with the skill to capture what is it we hoped to convey.

The music is quite multi-layered, and we always go for a wall-of-noise approach. We wanted it to be both abrasive and subtle, but flow in a natural way. This again is part of making the album work as a whole, rather than a collection of songs.

Blistering.com I’d say White Tomb is a lot less black metal than Sol. Agree? If so, why the abandonment or reduction of this style in your sound?

O’Ceallaigh: Yeah, I would agree with that. The pace of the album slows considerably in the second half. Once “Through the Collapse” started to come together, it felt wrong to add a more abrasive section, or increase the pace for the sake of it. It would have been wrong to place those sounds where they do not belong.

I would not regard White Tomb to be an indication that we are stepping away from black metal and progressing towards a slower sound, because that is not the case. Albums serve as relics of a time and place and preserve the mood and energies present when they were written and recorded. They are created with difference visions. I think people often spend too much time thinking about an albums relevance to its predecessors, when it should be viewed as its own entity.

Blistering.com: Certain portions of the album are utterly devastating, like the 6:19 mark in “As A Furnace.” It’s simple, yet it’s harsh and it moves you. Have you found that more simpler avenues can work to a greater effect?

O’Ceallaigh: We are beginning to appreciate that less is more. I think repetition and simplicity allows the listener to disengage and feel the music. Technical music can become distracting and more difficult to get lost in. In some ways, White Tomb is the most minimal music we have written. With this recording we made sure every change felt natural, more so than we had ever considered this before, and as a result there is somewhat of a more simple dynamic than on previous releases.

Blistering.com: I was startled when the album took a left-turn at the halfway mark during “Watchers Restrained.” What type of effect do you think that will have on the listener?

O’Ceallaigh: That section is certainly provoking different responses. I’m an avid listener of extreme/funeral doom but it is not often that it can be heard taken out of context. “Watchers Restrained” was intended to be the most dense and dark track on the album and the conclusion that was written for this track is a perfect accompaniment to the abysmal mood that is present throughout. Nathan (Misterek) did an incredible job and created what we feel is a perfect vocal track for this section.

“Watchers Restrained” concludes the theme of a collapsing earth and it is also the final moment of utter anger and describes scenes of everything coming undone. “Gentian Truth” is far more exhausted in its mood. As the closing section of “Watchers Restrained” represents a final collapse, we wrote what we felt was most fitting to this. It is our intention that this section will provoke, for the listener, the scene we hope to depict.