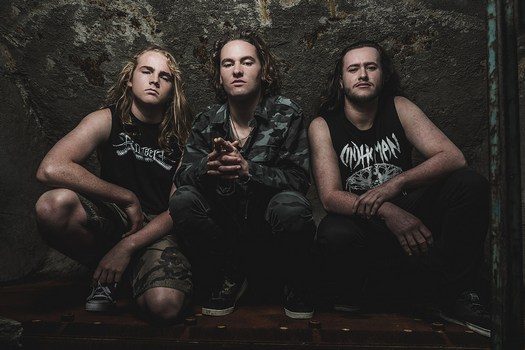 Some often speak of thrash as having a sound that can’t be further accelerated or changed too much. But bands like Alien Weaponry exist to prove otherwise. Adding in a genuine tribal presence to their brand of massively groovy thrash, Alien Weaponry are incorporating Māori culture to bring in a fresh perspective to the genre. It’s a sound that works quite well, as evidenced by the band being put onto Ministry’s current US run – it’s clear that more and more eyes are shifting to the band since the release of Tū earlier this year. Prior to heading to the States, we shot off some questions to drummer Henry de Jong to give us an update on what the band has been up to.

Dead Rhetoric: Considering the ages of the band members, when did you start your pathway towards music?

Henry de Jong: We started Alien Weaponry when Lewis was 8 and I was 10 years old, but we’d been playing for much longer than that. Lewis started playing guitar when he was 3 – he got a tiny electric guitar for his 3rd birthday, mostly because he kept trying to take our Dad’s. I had been playing drums for a couple of years before we formed Alien Weaponry. I started playing my uncle’s old Ludwig kit and then we got our own kit at home. All of our instruments were set up in the lounge, so they were very much part of our lives.

Dead Rhetoric: With the stigmas that exist in Māori culture, what drew you towards heavy metal?

Henry de Jong: Partially it was a result of being brought up listening to metal (our Dad is quite a metalhead); and being taught the meaning behind the songs. A lot of metal is very political and has a strong message. So for us it was cool to be able to play a genre which is all about expressing yourself completely – no holding back.

Dead Rhetoric: Could you talk about the role of Te Reo Māori on the band’s music and members’ personal life?

Henry de Jong: Lewis and I started our schooling at a kura kaupapa Māori, which was a total immersion Māori school. I was there until my third year of primary (elementary) school, and Lewis did his first year there before we moved schools. We also learned a lot from our father – he knows a lot about our family history, especially on our Māori side. So it has definitely always been a part of our lives – not just the Reo (language), but whakapapa (genealogy) and paki waitara (stories) as well.

Dead Rhetoric: Do you feel that you are spreading the word about the Māori language?

Henry de Jong: A lot of people, especially from overseas, their only exposure to the Māori language and culture is tourist ads and the All Blacks doing a haka before a rugby match. People have said to us, the fact we are telling stories about events that happened in history and issues that are important to us has made them more interested, and gives them an incentive to learn Te Reo Māori, so they can understand the things we are singing about. That is especially humbling when it comes from people who have never even been to Aotearoa (New Zealand).

Dead Rhetoric: Where do you feel the connection between tribal music/culture and heavy metal lies?

Henry de Jong: Metal is a culture of its own, and metalheads are almost a tribe, so I guess you could say metal culture is a tribal culture. Maybe it’s that similarity that is drawing people to our music currently. Māori who don’t listen to metal are being drawing into the ‘metal’ tribe; and metalheads are taking an interest in Māori culture (which is actually many tribes with a common ancestry – a bit like metal). So there is a very natural connection.

Dead Rhetoric: Do you feel that there’s a sense of community by being in a band with brothers?

Henry de Jong: Definitely, although I would have to say that Lewis and I being brothers isn’t the main thing that creates the community, it’s the being in a band together. Ethan feels just as much a brother to both of us, and I think even if Lewis and I weren’t brothers, it would feel the same. A band is a close knit group that feels like family – whether we are blood relatives or not.

Dead Rhetoric: What are you most looking forward to on this North American tour?

Henry de Jong: First and foremost, we want to play some kickass shows and meet lots of fans and hopefully make new ones, but I’m hoping also to see something of the country. Something I’m really looking forward to is seeing snow for only the 3rd time in my life (one of the perks of living in the ‘winterless North’ of New Zealand is it never gets very cold). The first time I saw snow it was actually fake snow in a place called Snowplanet, and the second time we stopped for 5 minutes on the side of the road driving through to Wellington, so I’m hoping for a bit more of the full experience this time.

Dead Rhetoric: How did you end up drawing into the sights of Napalm Records?

Henry de Jong: Our management company, Das Maschine was responsible for that. We had finished recording our album, and originally planned to release it independently, which is often the kiwi way – we like to do things ourselves. We had had awesome support via a crowd funding campaign, but Oliver at Das Maschine felt the album would have better reach if we distributed it through a label. He approached several companies, and we all felt very comfortable working with Napalm – we could not have asked for a better partnership and they have really shared our vision for taking Tū to the world.

Dead Rhetoric: In going along with you being the youngest band on their roster, do you feel that you have to work extra hard to prove yourselves to some people due to your age?

Henry de Jong: I don’t feel like Napalm have ever expected us to work extra hard because of our ages. I think any band who has a relationship with a record label, management company or agent should expect to work hard if they want to succeed, but in saying that we have certainly not felt pressured at all.

As far as fans and audiences go, a few years back, I would have said yes, we had to work harder because of our ages, but these days I think people are less aware of our ages. When people come to talk to us after our shows it’s because they enjoyed our music. Most people are genuinely shocked to find out our ages – it’s becoming less relevant.

Dead Rhetoric: There’s not quite as much talk about New Zealand metal bands internationally. What’s your take on the metal scene there?

Henry de Jong: The NZ metal scene is really unique. There are a lot of different kinds of metal bands, but there is only a small number of each, because it’s only a small country. So you don’t get dedicated thrash or hardcore or death metal shows – all the different genres play together, with whatever bands are in the area.

So you could have a thrash band, a glam band, a grindcore band and maybe a pop-punk band all playing on the same night, to the same audience. But there is a real sense of community throughout the entire metal scene. Everyone knows each other – but that’s New Zealand in general. The rest of the world has 6 degrees of separation – in New Zealand it’s 2 degrees.

Dead Rhetoric: What sort of goals do you have for Alien Weaponry as the band continues to grow?

Henry de Jong: This year we smashed our goal of playing at Wacken Open Air by 2020, so we set a new goal to be playing headline slots on those big festivals. I think that might be a few years away yet, but we are back in Europe next summer, playing more festivals, including some main stages, so we are getting there. We also wanted to tour North America, which we didn’t think we would get to do this year, so it’s pretty special to be here right now, supporting Ministry, who we listened to a lot growing up.

We played one headline show as well, in the Navajo Nation, which sold out, so we would love to come back and do some more US shows in the not too distant future. We want to tour the world, basically. And, I suppose, ultimately, be as big as bands like Ministry, Metallica, Lamb of God – and to influence others like they have influenced and inspired us.

Dead Rhetoric: What are your plans for 2019?

Henry de Jong: We’ll be touring New Zealand and Australia in March 2019, including Download Sydney and Melbourne. And (as above), we’ll be touring Europe. We have a few other plans too, which I can’t talk about yet, but they will be announced on our Facebook page. And, in between times, we will be working on our second album, and hopefully release at least the first couple of tracks from it, if not the whole album.