Alchemy Chamber – The Pinnacle from the Pit 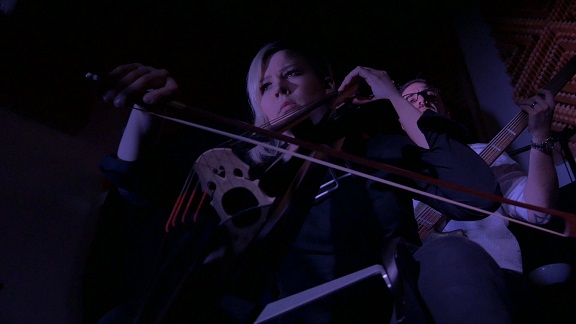 Classical music and metal are no longer strange bedfellows. When the likes of Celtic Frost and Therion first started to experiment with the two, there was no shortage of huffing and puffing, finger-wagging, suggesting there was no way such a combination would work. Of course, it did, with Celtic Frost and Therion opening the door for new subgenres and vast experimentation. Another branch of the tree is Vancouver’s Alchemy Chamber. Led by the cellos of Anna Kuchkova and saxophone/flute work of Kevin Arland, Alchemy Chamber is an all-instrumental metal band (“lyricless, but not voiceless”) dressed up in classical, creating epic, but no less heavy jaunts that come together on their debut, Opus I: Subtle Movements from Within. Here to tell us more is Kuchkova…

Dead Rhetoric: The merging of classical music and metal is no longer uncommon, but what made you want to bring the two together?

Anna Kuchkova: I’ve always had a vision for a project like this. I’m a classically trained musician, but has also been a metal fan and involved in the metal scene for a long time. It’s only natural that the two eventually merged.

Dead Rhetoric: What kind of misconceptions have you come across regarding classical musicians being into metal?

Kuchkova: Often, when people hear that you play in an orchestra, they think of you as a well-educated, professional musician… When people hear that you play cello in a metal band, they sometimes think that you’re just some nuisance that knows how to play a few notes and calls themselves a cellist… People with a more conservative outlook often think that playing in a traditional classical setting requires more talent and skill, and playing in a band is just some silly hobby. Some metalheads, on the other hand, might think that classical musicians are stiff and boring, and have no place in a metal band. Both are wrong!

Dead Rhetoric: Were there any metal bands in particular that inspired you to go in this direction?

Dead Rhetoric: Do think the use of MIDI and sound libraries has lessened the impact of classical music in metal?

Kuchkova: No. In fact, a lot of bands that use samples and MIDI sounds in their music are quite interesting. The use of those additions serves a different purpose. Usually “artificially orchestrated” music doesn’t have orchestral instruments as their main focus. It’s a good tool to create rich textures without the cost of hiring a full symphony. However, a project where cello and saxophone are front and center is a completely different story.

Dead Rhetoric: Was it decided early on that you would be without vocals?

Kuchkova: Yes. Think of saxophone and cello as vocalists.

Dead Rhetoric: Trying to imagine what the writing process is for you…where do songs typically start?

Kuchkova: They usually start with a simple melody that gets developed and arranged into a score for the four instruments.

Dead Rhetoric: Is it difficult trying to align cello and saxophone parts with guitar riffs?

Kuchkova: It’s actually more about aligning guitar riffs with cello and saxophone! It’s not anymore (or less) difficult than writing an arrangement for any other combination of instruments…

Dead Rhetoric: Your songs are short but very effective. Is the idea to get the point pretty quickly in Alchemy Chamber?

Kuchkova: They just come out that way, we’re not intentionally trying to make them long or short…

Dead Rhetoric: How does your music translate live? What kind of steps do you take to ensure you pull it off properly?

Kuchkova: Live sound was our biggest trouble for a long time! Feedback from acoustic instruments, terrible balance, not being able to hear what we’re playing… I am now playing exclusively electric cello on stage. We usually try to bring our own sound guy who knows our music and how to mix it as there’s some fine adjustment required in different places throughout the set. And we have an in-ear monitor system that is absolutely crucial to us, especially for the tuning between cello and saxophone – if we can’t hear each other well, it’s going to be a disaster!

Kuchkova: We’ll be working on new material and playing more shows. We’ll also be releasing a new video, but we’d like to keep it a surprise, so no more details about it.