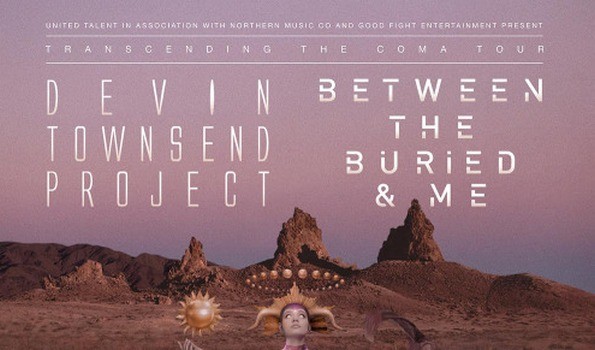 As the fall season brings upon a bounty of different touring choices, this writer decided to forgo the NYC date of this tour the previous evening due to a combination of catching a different show in town, and the fact that the Worcester date of the DTP/BTBAM tour was special. For some reason, Sabaton (currently on the road with Huntress and Trivium) was also going to be performing at this one date only.

Thankfully fellow DR scribe Matt Bower arrived a wee bit earlier than myself, and we were able to make it into the venue fairly quickly to ensure a decent spot down below for a rather all-star line-up of bands. There was no local opener, so Fallujah took to the stage first – operating on an abbreviated set that heavily featured cuts from their most recent effort, Dreamless. Witnessing them live a few months back with The Black Dahlia Murder, the one major difference (perhaps due to The Chance’s soundsystem), was that the synths were significantly higher into the mix. The band sounded great, and the heavier synth-presence helped elevate their songs to a higher level in the live setting. Some cuts included “Amber Gaze,” “The Void Alone,” and “Wind for Wings” – excellent material for the crowd to take in (though a song or two more would have been killer), and the band’s presence on stage continues to improve each time seeing them.

Next up was Sabaton, for whom the crowd was already starting to chant before they hit the stage. Indeed, the energy level was such that you would have thought that the band was headlining. One does question the need for two introductions before the band took to the stage with “Ghost Division” (why not just play another song?), particularly when playing a 45-ish minute set, but that was the only thing up for debate. Plenty of energy (and crowd participation) filled the Palladium from start to finish, with vocalist Joakim Brodén commenting on how the Worcester crowd doesn’t need to “warm up” but is already in full swing when the band comes out there. There’s not a band more ready for a headlining US run than Sabaton, who kept up the intensity from start to finish (some humorous banter as well, but they reigned it in to squeeze another track in at the end), with a set that included “40:1,” “Sparta,” “Blood of Bannockburn,” and “Primo Victoria” providing a nice look at the present and past. Interestingly enough, the band announced they’d be back in October for the Rock & Shock Festival towards the end of their set.

On the co-headlining tour, Between the Buried and Me was up next, after a brief delay with some of the lighting. Playing only their latest release, Coma Ecliptic, from start to finish, BTBAM tried to provide the audience with something special. A theatrical album for sure, and one that moves between softer and heavier moments, there was plenty of interplay to watch, both on stage and in the crowd. Interesting to see the crowd go from standing still to full-out moshing at the drop of a hat. Rounding things out was the lighting system, which was indeed the factor that made the set most memorable. The lighting went hand-in-hand, from beginning to end, and provided another layer of depth to the album for the audience to see visually, along with the music. It’s a gamble to go into the live setting when focusing only on one album, but the energy of BTBAM and the lighting provided a unique way to enjoy the album as a whole.

There’s few that can rival the presence of Devin Townsend on stage, and having missed his last few go-rounds, it was nice to be reminded of that enigmatic energy the man provides. Starting things off with “Night,” DTP played a pretty well-rounded set, with usual songs like “Kingdom” and “By Your Command” settling in nicely with Transcendence material such as “Stormbending,” “Failure,” and the excellent closer “Higher.” Not having seen DTP in a few years, it was also great to hear the rollicking “March of the Poozers” along with “Ziltoid Goes Home.” But if one thing took centerstage for the night, it had to be Devin’s acoustic “Ih Ah.” A very emotive performance, and one that really makes this writer long for seeing a complete acoustic set from him one day. There was some true magic going on there – Devin plays the metal card well, but it’s clear he can step beyond it without losing his edge. Of course, it wouldn’t be a Devin Townsend Project performance without some toilet humor (and some self-deprecating humor from Townsend), and his banter and stage faces once again provided a fun atmosphere to partake in that seemed to end far too soon despite headlining status.

All in all a nicely varied look at progressive metal that is going in three different directions (plus Sabaton). Those looking for a evening of intellectually stimulating (and some occasional toilet humor) should be making their way to the closest stop this tour is making.