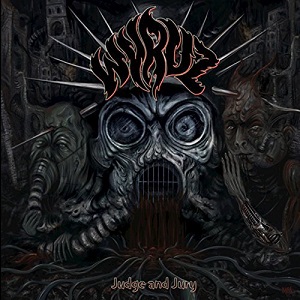 Always keen to tackle favored genres from fresh bands, Wyruz hail from Hamar, Norway as a filthy thrash quartet with extreme nuances on their second album Judge and Jury. Not really surprising given the fact that drummer Kenneth Skårholen spent over a decade in the industrial black metal group Tidfall, who you may remember from their early 2000’s releases on Nuclear Blast. After a couple of playbacks it’s easy to surmise that these musicians prefer to live in a crunchy, heads down triplet-oriented brand of metal that along with the pummeling power tempos assures a brutally satisfying experience time after time.

Kim Nybakken and Vegar Larsen handle the rhythm and lead axe duties, creating a whirlwind of excitement but also conveying the right amount of melodic temperance, even during the instrumental breaks in highlight “The Final Sign” which synthesizes the best of early 90’s Kreator, late 90’s Testament, and a bit of the almighty Slayer for good measure. Kenneth’s fleet of foot kick work has a little bit of a mid-tempo shuffle that should mandate whirling pit action for “Limitations”, adding in the right crash accents and propulsive fills a la the best drummers in the business. The death/black side comes out in many parts of the lightning fast drumming or guitar combinations for say the ferocious “Wither” and intense “In Hell” – pushing the BPM’s through the blasting limits a la Hate Eternal or Immortal while sucking the air out of the room when the four-piece change up the next part into relatively calm tempo pastures.

Vegar also doubles up on the vocals, and his natural propensity is to be clear but aggressive in more of a slightly raw savage scream manner. He wouldn’t be considered in the class of a Mille or a Tom Araya, it’s more of a montage of say Demolition Hammer meets Schmier of Destruction as you feel the desperate cries seething through the head banging riffs for “Fury”. Giving the listeners 13 slices of Wyruz in a compact 51 minutes, Judge and Jury differs from the younger generation of Bay Area worshippers as these musicians aren’t afraid to ramp up the precision and harmonies in an enticing way without sacrificing the speed, tone, or heaviness in the production and execution department. Solid stuff to suffer severe neck strain in the name of thrash.