Wyrd – Death of the Sun (Moribund) 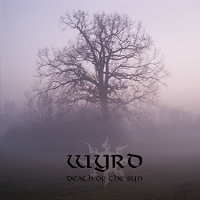 A textbook example of a strong, gallant Finnish epic/folk metal would be Moonsorrow, who going forward should be the scene’s permanent pace-setter. This is problematic for a band like Wyrd, who have an even longer track record than the aforementioned Moonsorrow, albeit without the ballyhooed albums. Active since 1998 and with several unsung, well-under-the-radar albums to their credit, the Finns took seven years to cobble together a new effort, which comes in the form of Death of the Sun. During this time, the landscape of Finnish folk metal has changed, prompting the band to head for the always-interesting “change in direction.”

Whereas previous Wyrd efforts were a straight, unruffled line right to the heart of melancholic Pagan winter, Death of the Sun finds the band (all six of ‘em) trying to weave in a myriad of new influences. The most identifiable would be sort of a wry, almost Agalloch-like plunge, as so found on the opening title track and meandering “Pale Departure,” which is easily the most “folk” song on the album. However, the clean vocal cache loaded into several of these jaunts could be the prime reason for dismissal. Of particular note would be “Inside,” an odd, progressive jaunt that neither fits the Finnish epic metal template, or much else for that matter.

Nevertheless, efforts like Death of the Sun certainly won’t allow Wyrd to keep pace with Moonsorrow, who are beating everyone at their own game. But, Death of the Sun is emblematic of a long-running band apparently tired of the sub-genre restraints they’re so accustomed to, or rather, burdened with. And with little else to prove in the regular, tried-and-true spectrum Finnish epic metal, perhaps Wyrd can’t be faulted for an album like this.