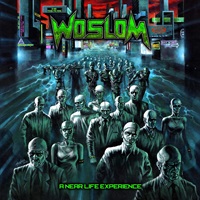 Persistence is admirable, especially in a marketplace where musicians are prone to throw in the towel earlier than ever if something isn’t working according to plan. Drummer Fernando Oster of Brazilian thrash band Woslom is the lone original member left from the 1997 inception of this group – who recorded five demos in the 2000’s before releasing their debut album Time to Rise in 2010. Recently replacing long-time bassist Francisco Stanich Jr. with Andre Mellado, the quartet (rounded out by vocalist/ guitarist Silvano Aguilera and guitarist Rafael Iak) are onto their third full platter, A Near Life Experience, and first gaining an international boost on the label front.

Right out of the gate through the shrieking, melodic vocals and semi-speedy riff choices along with steady double bass/ snare pounding you can tell Woslom worship at the altar of Bay Area thrash – Metallica, Slayer, and Testament three sure fire discographies bandied about as creative fuel for these compositions. The longest track happens to appear early on as track two – an almost nine-minute title cut that features longer instrumental sections (four distinct riffs in the first two minutes before the singing kicks in), Silvano gravitating to a James Hetfield snarl meets Chuck Billy delivery and tone while the mid-tempo changes give the arrangement a distinct headbanging nature. It’s nice to hear Andre’s bass gaining equal footing in the sonic landscape as the axe play – which can be quite harmonic and enticing throughout as Rafael knows his neo-classical/shred runs while still giving off a classic, melody-based approach to make the thunderous “Lapses of Sin” and mid-tempo marching “Unleash Your Violence” two highlights.

Certain aspects work better than others – Silvano occasionally straining his upper register for less than ideal results on the speedier “Brokenbones”, while naming the last two songs “Total Speed Thrash” and “Thrasher’s Return” (a Bywar cover) may be throwing around the love of the genre in a blatantly obvious fashion. War, aggression, violence, and redemption are subject matter tackled on the lyric front, capped off with a zombie-oriented cover – there’s nothing to fault in terms of professionalism on Woslom’s part. At this deep juncture, A Near Life Experience can entertain but doesn’t elevate the band into anything but a facsimile of their heroes. And given the burgeoning explosion of third-generation acts globally, one wonders if the audience will stick around long-term.