Within The Fire – Still Burning (Self-Released) 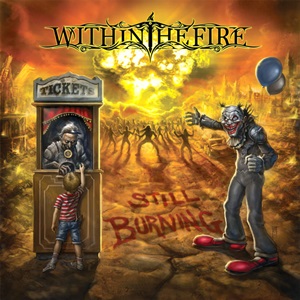 The universe spins and planets align for specific reasons at the right time. In the case of Albany, New York heavy metal band Within the Fire, who would have ever thought that the dissolution of one long-time band in Enertia would result in four members joining guitarist RJ Pipino for this outfit. Over the course of the past few years, that’s what’s happened – as vocalist Scott Featherstone, guitarist Roman Singleton, bassist Joe Paciolla and drummer Jeff Daley take their veteran musical abilities and professionalism to give the full-length Still Burning quite a few legs up for a relative newcomer (active since 2010).

What you have here is a very straightforward traditional metal platform in these 9 songs chock full of mid-tempo anthem-oriented riffs, engaging melodies with a lot of background vocal supplementation that encourages audience participation plus pays homage to a lot of their heroes that they cut their chops on growing up. Roman unfurls some serious licks and neo-classical runs for “In My Eyes” that should have most axe aficionados heartily applaud, while the opening sequence of riffs and swinging drum parts to the title cut makes me think of classic Judas Priest meets “Live Wire” from Mötley Crüe. The slower, grittier “Hypnotized” contains a lot of sexual themes lyrically as the bass riff and give and take guitar parts resonate between classic Y&T and possible the 80’s Accept-era during “London Leatherboys”. When the band choose to get a touch heavier/faster, the possibilities open up for more unison musicianship as the call and response “Throttle” illustrates.

To those who haven’t had the chance to check out the vocal prowess of Scott Featherstone through his work in Enertia or Ion Vein, Within The Fire serves up another facet to his incredible abilities. Check out “Can’t Let Go” for some AOR-aspects that make me think of ex-Foreigner singer Lou Gramm, beyond his conventional Mike Howe/John Bush oriented power and control that remain prominent. Current Flotsam and Jetsam drummer Jason Bittner makes a guest appearance on the closing Ozzy-esque “Godless World”, giving a master class in proper double kick and propulsive metal percussion 101.

Still Burning has all the tools to put Within the Fire at the top of the US metal heap – and along with Aftershok makes me thing the present looks promising for this revered sub-genre that may not necessarily be hip or fashionable, but will never die.