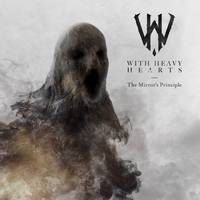 Admittedly, before doing the pre-requisite homework, there was a moment of dread with looking at the name With Heavy Hearts. For some reason, an image conjured up of a modern metal act, with a leaning towards pop-driven clean vocals and overbearing synths. Turned out, all of that was nothing more than a dream, and The Mirror’s Principle is an album of melodic death metal riffing – modern, but still with plenty of abrasion left intact.

While The Mirror’s Principle has a modern edge to it, it’s more in the use of some synths than anything else. There is a blurry line that one could draw from In Flames (before they went off the deep end with their sound), and the synth work present often bows out so that the guitars can get their thrash-influenced riffing front-and-center. The melodies present on the songs often appear at the mid-tempo, as “Black Soul” effectively displays. Of course, things have a tendency to speed up from there, with keys intertwining with the guitar riffs to bring in a catchy display, but it’s the slow closing track, “Recreation of a Mind” that appears the standout. Bringing things into a more emotive and melancholic positioning, they don’t posture into clean vocal territory, but clean guitars and synths couple with screams to create some real standout melodies. They do move into clean vocals (see “Blind Eye”), but it never becomes formulaic, which gives them a stronger pull.

The Mirror’s Principle hits all the marks for a modern melodic death metal album. While it doesn’t venture far from that territory, it’s an easy sell with an emphasis on strong melodic riffs, just the right level of heaviness, and intense screams.