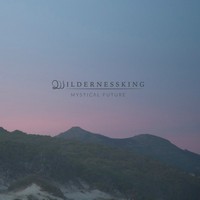 First being introduced to South Africa’s Wildernessking with The Devil Within and The Writing of Gods in the Sand on Bandcamp, it’s been interesting to be able to look back at their past work as well as their progression. Mystical Future sees the band moving towards more atmospheric, and less “brutal” waters, yet the energy still remains the same.

Mystical Future sees more leaning on the atmospheric side of the band than the black metal one, but the beauty trumps the ferocity in terms of lasting value. Shifting in sound much the same way as bands like Alcest, Wildernessking create some serene soundscapes as you move through Mystical Future, and the lengthy tracks successfully avoid any tedium. This is evidenced by the mellow “To Transcend” and probable album highlight, “If You Leave,” which provides the listener with over 13-minutes of gloomy post-black melodies, some female vocals, and some excellent heavy/mellow dynamics. But the band hasn’t completely tossed aside the black metal ethos just yet, with other cuts like “I Will Go to Your Tomb” and “With Arms Like Wands” embracing a more visceral edge, full of screams and blast beats. Merging these two ideas together, and enjoying the album as a whole, is a key point in Mystical Future’s success.

Continuing to progress forward without dismissing their roots, Mystical Future is a strong effort from the up-and-coming act. The “post” elements add flavor to the black metal backbone, which never feel played out or stale. It’s an album that can be snarling as well as sweeping in its beauty, while taking you on a trip you’ll want to make a return to.