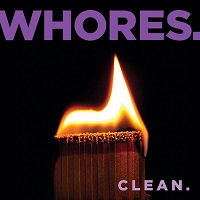 Atlanta’s Whores. follow up their nearly flawless EP Ruiner., with another great release. Clean. may not top what they did on that EP, but they give it a run for it’s money and quite honestly, it would be tough to beat. Whores. are a bit of a throwback, with a sound that screams 90s, and would have fit perfectly on the Amphetamine Reptile Records roster back in the day, right alongside should have been contemporaries such as Helmet, Unsane, or The Melvins. Not to mention their heavy noise rock sound is like something you would have heard on the old Dope, Guns, and Fucking In The Streets compilations the label was putting out back in the day, too.

Clean. hits hard from the opening note  pummeling riffs and discordant textures. The album opens up with “Baby Bird” that sounds like a missing mid-era track from the aforementioned Unsane, super heavy mid-tempo riffs over a thick, rolling groove. “I Am Not A Goal Oriented Person” has jangly, angular guitars that are reminiscent of something that you would have heard from the Jesus Lizard in their heyday, while “Blue Blood” has a punishingly heavy riff that moves at a snail’s pace with shouted vocals recalling early Helmet.

Whores. are by no means a one-trick pony, simply copying those that came before them. While their influences are clearly evident, they take the formula those bands forged a couple of decades ago and breath new life into it. My biggest complaint is that Clean. is only one track and a couple of minutes longer than their previous EP so if being too short is my only beef, I’d say they are doing just fine. Despite the short running time, this is a rock solid release and fans of AmRep noise rock bands of the past should take note. Don’t sleep on this band.