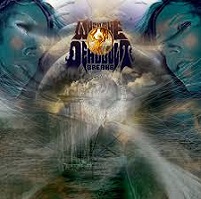 Based in Connecticut by the devise of vocalist/guitarist Aaron Lewis in 2005, now banded with vocalist/bassist Mike Parkyn and drummer Rich Kalinowski, When the Deadbolt Breaks is an undertaking of auditory emotion and allusive vibes. Drifting Towards the Ends of the Earth, the band’s third full-length album and also their second double-disc release (one being a series of five pieces strung into a single composition titled “My Coffin is Loaded with Sand and Fire”), carries on their pattern of voluble titles and protracted metal. Evidently, it would be absurd if they didn’t have every album title longer than the band’s name.

In its entirety, Drifting Towards the Ends of the Earth is nearly two hours of droning grooves, metaphysical movements, and lambent tempos. With distinctive alternations between band members, vocals vary from cavernous shrieks to dreary melodies, fastening the differentiating moods, structures, and tones densely fashioned in each song. Blazing rhythms in “Sleeps in Burning Hills” drift with the reverberating low-bass and abrasive vocals until smoldering to transcendence around 4 minutes in, stifled by atmospheric phrases mingling through intervals of slithering guitar solos, and lastly snuffed by the sound of thundering rain. With a most sedative segue, the rainfall continues to pour into the next track, “Too Much Perfection is a Mistake,” an instrumental overcast of inviting desolation.

So, if you relish in submersing yourself into widespread, unrushed, passages of experimental doom, Drifting Towards the Ends of the Earth is the record to devour those empty hours. The songs are leisurely with repetitive riffs but also broadly individualized, as to avoid over-consistency and reiteration. Moreover, even the recording quality changes for the sake of tonally enriched atmospheres. Turn on these tunes, and unlock an extensive session of psychedelia and sludge.