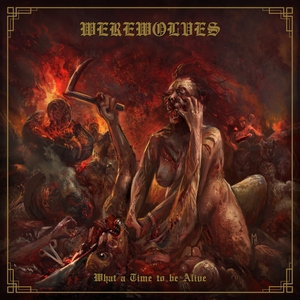 Quickly returning after their debut last year with The Dead are Screaming, the furious blackened death act of Werewolves are here to deliver more energetic extremity with What a Time to Be Alive. It delivers pure fury and a bit of fun along the way, which is all you can really hope for with an album like this.

If anything, the Werewolves claws have become a bit sharper with this release, with the speed seemingly increased even further – the band’s d-beat, war-like tones hitting some scorching tempos from start to finish. There’s not much room for subtlety with this sort of thing, and the band is rather unrelenting with their execution. Buzzing guitars swirl around frenzied d-beats and blasts while the vocals bark out carnivorous lines in a torrent of chaos. That’s really the most apt description of what you get here – total chaos. With the zipping tempos, you don’t get much of a chance to catch your breath, and as expected, things start to take a turn for the blurry the longer you continue forwards. But, at least there’s a sense of fun that keeps the album afloat. Some of the lyrics take up this aspect, without becoming silly, and it’s a nice change up from bands taking this sort of musical whirlwind all too seriously.

Expect an onslaught of violence when you open up Werewolves’ latest. What a Time to Be Alive takes all of the anger within and lets it bubble up to the surface on a full boil. Sure, it’s a little one-note in execution and some of the brutality may be tempered as you listen to all of it at once, but there’s something to be said for the band’s all-in mentality and utter ferocity that they muster from start to finish. 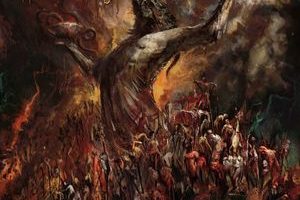