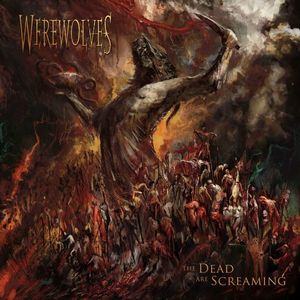 Death metal mavens Werewolves hits the ground running with their debut album The Dead are Screaming. Razor-sharp arrangements and tight musicianship help make this album from the Australian death mongers quite a satisfying listen, even through for the most part, it’s a by-the numbers death metal record that regretfully offers nothing new. In a saturated sub-genre such as death metal, bands tend to fall into two categories: the ones who aren’t afraid to experiment and come up with unique embellishments, whether they be instrumental or through the production (something that Pissgrave excels at), or the dime-a-dozen Death clones.

Having said that, there are still some noteworthy moments in “The Dead are Screaming”, namely the mid-tempo battery of “Fountains of Bile”, or the apocalyptic dread of “Dogknotted”. “Showering Teeth” is a satisfying closer for an album that’s, for the most part, replete with interchangeable songs that readily wear their welcome quickly.

Death metal is a dynamic sub-genre of metal that lends itself to fearless experimentation, so coming up with albums that have songs that have already been done to death (pun intended) is a huge disservice to both the artist and the listeners. I trust that Werewolves have some interesting tricks up their sleeves, I just hope they’re not afraid to use it.