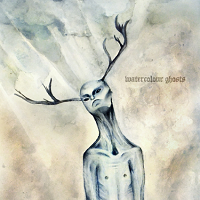 As has long been the case, the cross to bear with such acts is the vocalist, who can either be a real wiener and whine the tunes away, or take command of the matter and add some flavor. (Lest we overlook the increasing un-importance of metal; ‘tis a troubling happening all the way.) For Watercolour Ghosts, vocalist Drew James Griffiths proves himself to be a value commodity. He’s partially miscast in a band like this, as his steady croon is almost FM ready-ready, to be frank. Then again, he’s got his share of enticing moments, whether it’s on the closing portions of “Solipsism” (lots ‘o layering going on), or the wrenching “Collapse,” which is the band’s biggest plunge into minimal, prog-ville.

There’s still a bit of rough edges to work through for Watercolour Ghosts, who should in due time, fully grasp the dynamic scope needed to merch metal and shoe-gaze. Nevertheless, ‘tis a nice jumpstart to something that comes across like a fun project for a bunch of gents already hitting their creative stride.