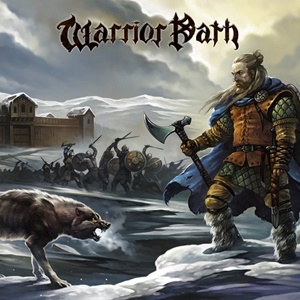 An epic heavy/power metal band from Greece that features stellar support on the bass, keyboards, and vocal front from notable players, Warrior Path at its core developed as a lifetime project from guitarist / composer Andreas Sinanoglou. Knowing that he needed to flesh out his ideas with proper complementary musicians, he secured the services of drummer Dave Rundle, bassist/keyboardist/ additional guitars from Bob Katsionis (Firewind), and landed vocalist Yannis Papadopoulos (Beast in Black) to complete this self-titled debut full-length. On paper, this should work – as long as you are willing to understand that many prominent influences sprout easily in these ten tracks as reference points to the Warrior Path attack.

“Riders of the Dragon” has this slower, epic climb of a riff and hook that makes you think of Maiden – even the way Yannis goes for a specific melody pattern that Mr. Air Raid himself would love. “Rime of the Ancient Mariner” probably came in Andreas circle of creation, although the calmer, mid-section with clean guitars and serene keyboards gives the track added depth. You can feel the synchronized headbanging permeate “Sinnersworld”, Yannis delivering killer double-tracked harmonies for the chorus, the riffing and tempo in league with early Helloween. Two of the epic songs appear midway in the track listing – “Black Night” containing tasteful acoustic guitars before shifting between electric activities as a dramatic power ballad that picks up the power pace towards a fitting, culturally intense conclusion, while “The Path of the Warrior” settles into a fantasy story with a mid-tempo feel that mirrors Manowar and Iced Earth, featuring an uplifting lead break and proper buildups, choirs, and keyboard orchestration. The band smartly mix things up tempo-wise towards the back half – the speedier “Fight for Your Life” key to getting that blood pumping again with searing melodies and harmonies abound.

My only beef relates to the synthetic/digital type drum production that these songs portray – you keep hoping for more snap and pop on the snare side, and it’s a shame as Dave Rundle can navigate with no trouble around his kit. Overall Warrior Path will appease most into epic heavy/power metal, especially those who love Iron Maiden, Helloween, Iced Earth and those offspring.