Warnot – His Blood is Yours (Nightmare Records) 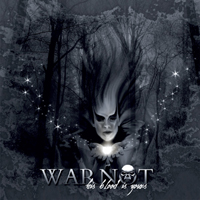 The product of former Cloudscape guitarist Bjorn Eliasson, Warnot is another a long line of studio projects with a cluster of guest vocalists. The whole “metal opera” thing is entirely too played out, so forgive us for approaching His Blood is Yours with a sharp degree of unease, if only for the fact that a lot of these projects have the same self-fulfilling, overblown-because-we-want-it-to-be feel. In light of the fact there is no major “face” to put to Warnot, it helps understate and minimize the role of the guest singers

, thus removing a lot of the unnecessary pomp and bore.

Being that Cloudscape is nothing more than a second or third-tier progressive power metal, the ability to gauge where Warnot lands is difficult. Eliasson handles all instrumentation here (including drum programming), so there’s the subsequent power metal knocking around taking place on “Raptures of the Deep,” while Dream Theater’s “Pull Me Under” gets twisted into a new form on “My Darkest Hour,” which coincidentally, is the best song

The six guest vocalists (and Eliasson) blend into the scenery, with perhaps the only recognizable fellow being Cloudscape’s Mike Anderson. Still, it’s not like an Avantasia album where a select guest spot hoists up an entire song; rather, melodic and song-oriented numbers like “A Late Night Dance with Death” and “I Am A Ghost” make for conventional hard metal numbers, with little in terms of ingenuity, yet with sharp jabs and hooks in the vocal department. Such things will happen when your guest singer

base comes from the likes of relative unknowns such as The Bo Wilson Band and Doctor Weird. Give credit to Eliasson for giving some unfamiliar faces some action, though.

His Blood is Yours coincidentally, keeps pace with the bulk of the Cloudscape catalog. You know, it’s unthreatening melodic power metal with a slight symphonic twist, not exactly heavy enough to hang with Symphony X, but not frilly enough to be a part of Rhapsody of Fire’s gang. That space in between sure beats hanging around on the lower rung, that’s for sure.