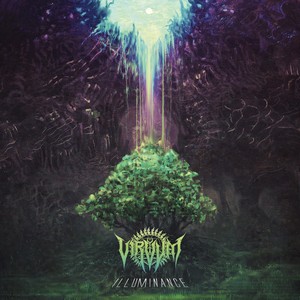 At this point in 2016, the groundwork has been laid by a fresh slew of bands that introduce atmospheric melodies into otherwise brutal and technical death metal. Bands like Fallujah, Inanimate Existence, and Rivers of Nihil have set an incredibly high bar for bands to follow. With the release of their second release, Illuminance, seems you can add the Swiss act Virvum as another band set on raising the atmospheric bar.

The stunning cover art of Illuminance perfectly portrays what you are bound to hear over the course of the album. A great beam of light introducing some starkly contrasting beauty to the otherwise sinister darkness that surrounds it. Equal parts eerie, brutal, and serene – Virvum works best in juxtaposing their technically-ridden death metal with inventive melodies that seem destined to put the listener into a slack jaw with their beauty. Take the 9-minute title track, for instance, with a dark and otherworldly beginning that raises up into raging tech-death, complete with all of the riff fireworks that you’d expect to hear. But when the band eases off of the throttle around the halfway mark is when you’ll get the full treatment of rich, awe-inspiring melodies that stand out in their contrast to the abrasion around them. Your first impression of this will be in the short opening track, “The Cypher Supreme,” which veers between frantic death metal, impressive melodies, and effective fretless bass – only to bring things into a massive ending crawl. Closing things out with the impressive “II A Final Warming Shine: Ascension and Trespassing,” the band does right by the song title and sends listeners off with an impressive mix of gorgeous leads, spiraling melodies, and even some quasi-clean vocals to leave an abrasive yet soothing feeling not easily forgotten.

From decidedly brutal to dreamy, Illuminance hits all of the right sweet spots for a death metal release. Each track loaded with melodies you won’t forget, but keeping the right balance of carnage to ensure you don’t forget what you are actually listening to. Expect Virvum to be front and center when it comes to 2016’s tech-death highlights.