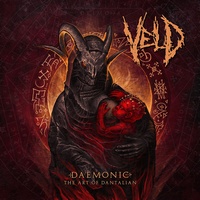 Poland’s land-locked neighbor, Belarus, seems to be turning up the metal heat lately. Its latest product is that of Veld. Apparently taking a big nod from their Polish next-door neighbors, Veld takes some of the surgical execution of some of Poland’s finest and merges it with a solid dose of impressive brutality and atmosphere. An album seven years in the making, Veld’s fourth release follows Love.Anguish.Hate, which saw the light of day back in 2008.

Most notably, Veld takes its approach to death metal via two different sources. On the one hand, you have the precision and intensity of Polish death metal akin to early Decapitated, later-day Behemoth, and Yattering, which fuels the band through warp speed tracks like “Constant Suffering” and “Merciless and the Innocents.” Yet, other tracks display a more atmospheric death metal movement, not unlike what one would expect from Nile. These appear in the slow, churning of the instrumental song “In Eternal Waiting” and “Endless Spiritual Paranoia,” which has some atmospheric effects added to enhance the mood. Either way you look at it, you can expect to be given quite the technical bludgeoning as you move across the album. The only real relief you get is the short, acoustic interlude “Lost but Never Forgotten” for a breather.

Daemonic: The Art of Dantalian is sure to give a wicked blast of fury with some atmospheric components that keep it afloat for its near 50-minute length. While it may not break much new ground, it’s yet another rock-solid example of impressively brutal death metal that will make any extreme metal fan sport their best evil grin.