Twenty years ago, ex-Edge of Sanity frontman Dan Swanö set out to create his version of how a death metal album would sound if it were recorded in the 1970s. The resultant Moontower was dominated by Swanö’s crafty synth work and progressive angles; all you had to do was remove his throttling death metal vocals and you’d essentially have a heavy prog rock album. While we’re not sure if his fellow Swedes in Usurpress leaned on Moontower for inspiration, their new Interregnum is designed largely the same way. It’s simply the band, in their own words “taking inspiration from the hard rock and prog rock movements of the early ’70s and putting a heavy death twist on it.” Lo and behold, it’s the best album of their career.

So melodic and spacy is opener “A Place in the Pantheon” that it prompts the necessary look-back to the band’s 2016 The Regal Tribe effort, which, as you can surmise, is a pure death metal album. It’s an instant and otherwise excellent shock to the system, the necessary fusion of heavy rock and jazz in a death metal context. Usurpress maintain their death metal edge on the title track and “In Books Without Pages,” but the songs have a much looser feel, wandering into prog territory by way of adventurous bass lines and synths.

The album’s most choice riff has to be on “Late in the 11th Hour,” a melodic chord meld that ramps up into melo-death territory. (Again, new space for the band.) But, it’s closer “The Vagrant Harlot” that nearly blows the whole thing up, finding Usurpress mingling in near-dark rock, complete with clean vocals and more beauteous riffing.

Usurpress should be lauded for sticking their necks out on Interregnum. Doing another The Regal Tribe would have been safe; this is an entirely new and boundless avenue, one that will open many new doors for them, if there is any justice in the world. 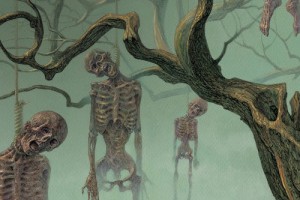