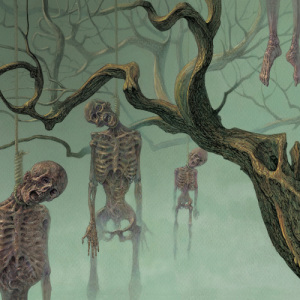 A couple of sub-plots here worth noting: Usurpress’s The Regal Tribe is loosely based on vocalist/lyricist Stefan Pettersson’s battle with bone cancer, providing a rare, if not human angle to a death metal album. (“Life metal” perhaps?) The album is the last for drummer Calle Lönnberg, but the first for bassist Daniel Ekeroth, a man best known for his super-excellent 2008 Swedish Death Metal book. None of these, however, are enough to detract from The Regal Tribe’s stated outcome, which is a foaming mix of vintage Swedish DM and sludge.

The straight-on death metal angle is the most convincing for Usurpress. They don’t come near re-writing the rulebook, but display a common, if not comfortable angle on the sound. There’s a wealth of hefty tremolo-picking action in accordance with the classic Stockholm sound, with some (see: “Across the Dying Plains”) having more impact than others. In fact, opener “Beneath the Starless Skies” is almost a false-starter because of its gentle, melodic mid-section, a display that rarely comes up again. (“On a Bed of Straw” also factors in.) But nevertheless, there are some warts-and-all, quite strong lyrical takes from Pettersson, who manages to be both discernable and personable (if you will), an odd happening on a death metal album, but given the circumstances, certainly appropriate.

Some attention may be placed upon the use of so-called “progressive elements” here, but they’re more decorative than anything. Usurpress has managed to create a dutiful album under difficult circumstances, coming across as a band who is not interested in riding Swedish death metal’s legendary coattails. May there be less drama-rama next album, too.