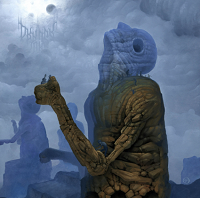 A wily Australian bunch with a penchant for stunning artwork (the same bodes for their debut The Wretched Ascetic EP), Ur Draugr fall through the cracks as being neither death nor black, but one of those difficult to pin down “blend” bands. Of course, the easy way out here is to call this trio “extreme,” which indeed they are. But there’s more to it on With Hunger Undying, especially in the instrumentation department where they’re fine with throwing down some folk, jazz, and progressive happenings. Through it all, the one closest comparison might be an odd one: Negura Bunget.

Melding odd chord combinations and wry arrangements, the fact Ur Draugr can operate without much of a situation/song standard foundation is an accomplishment onto itself. Naturally, there’s a linear element to nearly all of these songs; you’re going to have to push hard to grab onto anything quasi-memorable. The mangled guitar work, though, is suitably caustic and at times, overbearing. There’s not much in terms of melody here (in the traditional sense, mind you), but the note placement on a cut like “Seeds Sown in Famine” says it all – Ur Draugr is capable of taking the long route to get to where they’re going, which isn’t necessarily oddball-ville, but it’s pretty darn close.

The album eventually winds down with the climatic title track, which is finally when Ur Dragur is able to build a cohesive climax. The various peddles, drum drops, and blast segments are quite reminiscent of Negura Bunget during their peak years, which would be the mid-00s. There’s just not the sometimes unnecessary element of “weird” running across things, yet you can be sure if there’s a more convoluted and challenging body of work than With Hunger Undying, you’re probably looking in the wrong spot. 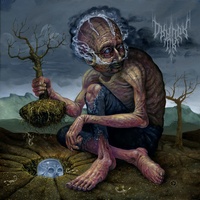