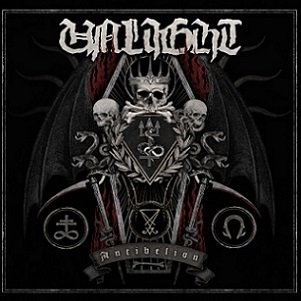 Germany’s Unlight formed in 1997, which is the exact time when black metal was starting to reach its peak. Given that particular climate, bands unilaterally adopted the same look and aesthetic: corpse paint, bullet belts, inverted crosses, and the like. While the lack of proper internet evidence prevents us from knowing if Unlight followed suit, their modern-day look and presentation is fit and proper for 1997. As such, their seventh full-length Antihelion is a black metal assault to the hilt, take it or leave it.

The rub with this kind of black metal is that dynamics often suffer for the sake of extremity. In the case of Unlight, the Germans are able to strike the occasional balance, like on excellent opener “Create and Annihilate,” which melds piles of guitar harmonies with the war-torn blasting of prime-era Marduk. “Leveller of Kingdoms” follows suit, relishing in driving mid-tempo realms, highlighted by blinding speed-picking, while “Flight of the Sinistral Witch” pursues the hallowed body of Storm of the Light’s Bane Dissection and Naglfar in one fell swoop. In fact, Unlight’s constant reliance upon melody is their strongest suit, as so found on album gem “To Sear the Heavens.”

Perhaps one of those European bands buried way too down the line because of scene oversaturation, Unlight can more than hold anyone’s jock based on Antihelion. And when combined with their unyielding, if not stubborn appearance, then you have a dyed-in-the-wool, unflappable, true-to-the-end European black metal unit. Now in their 20th year as a band, Unlight clearly have been doing something right to last this long.