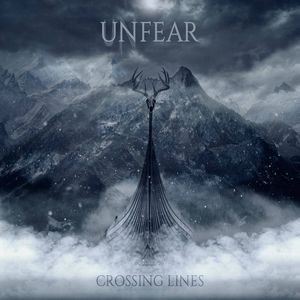 Always pleasing to hear more melodic death metal, particularly when it doesn’t come from the usual countries of origin. Unfear hail from Argentina and Crossing Lines is their first album. Safe to say that those who yearn for some melodic death metal that can push in a modern direction without forgetting that riffs are king will enjoy this one.

Making a sizable opening with “This Sacrifice” (after the mood-setting “Victory or Valhalla”), it makes a good indicator of what you can expect for the rest of the album. Unfear make it a habit over the course of Crossing Lines to make sure that the riffs work. After all, when melodic death metal as a genre has been driven into the ground over the years (along with plenty of others), the groundwork that needs to be done is making sure that you can execute it with flair. Something that the riffs of opening tracks “This Sacrifice,” the title track, and “Shining Shields” effectively demonstrate. Nothing really slows down until “Keeping Secrets,” which opens with some clean singing and works as more of a ballad-esque track, gaining some momentum over time and showing a more emotive side to the band’s riffing. Later highlights “Scars of War” and “Betrayer of the Gods” show their mid-tempo, galloping and triumphant riffs at their peak, alongside some solid growls. The clean vocals are also used well, never becoming overbearing or predictable – having a feel more towards Gardenian’s Sindustries than say, Sonic Syndicate.

An enjoyable debut from Unfear, Crossing Lines may not go outside of the box of melodic death metal but nor does it need to. Well-written and full of catchy yet aggressive riffing, those still hip to the genre will find it quite pleasing. As it is their debut, it leaves an impression that Unfear are a promising act to keep your eyes on as the years move forward.