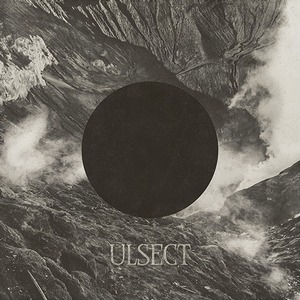 Falling squarely into the “how did we miss this album” category, Ulsect’s debut album has been out for a few months at this point. The fact that it contains current and ex-members of Dodecahedron and Textures further amplifies the question of its absence. But better late than never for this Dutch-based act, particularly if you dig bands like Gorguts, Ulcerate, or Deathspell Omega.

While there are a lot of bands now vying for that dissonant death/black metal sound, Ulsect manage to put their own spin on the formula. First off, Ulsect succeed in being a bit more succinct in their approach. Don’t despair, there’s plenty of angular complexity and atmospheric brooding abound, but with shorter track times for the most part they melt things down to their essence instead of leaning on more bloated and meandering riffage. In addition to the aforementioned influences, there’s an occasional post-metal vibe (see “Moirae”) as well as some Meshuggah/Gojira nods in the overall gleam and occasional wall of sound aggression (“The Endling”). Throw in some gloominess and additional melody at times (“An Augury”), and you’ve got yourself a winning combination that stands out from the dissonant hordes. In fact, for as much as the visceral tension is pleasing (see the beginning of “Unveil”), the melodies are what put the band over the top. The dark, bleak edge that coats the songs give a more emotional attachment, which is frequently absent in this type of material.

Containing some established players, Ulsect capitalizes on understanding what works within dissonant death metal and expanding it into exciting directions. While one can only imagine how they’ll up the stakes next time, for now consider Ulsect to be one of the more promising bands in this territory.