Torian – God of Storms (Ram It Down Records) 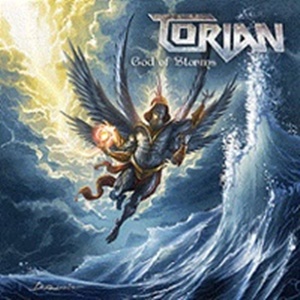 The upstart European label Ram It Down Records (appreciate the Judas Priest reference) starts on a strong note with German act Torian and their fourth full-length God of Storms. Starting in 2002, they’ve released three previous efforts and an EP – but probably remain relatively obscure in North America due to a lack of distribution domestically. Hopefully this record will change that tide on a larger scale – as this is an impressive combination of American and European power influences with thrash, traditional, and folk nuances to really command your attention from the first to last note.

Smartly securing the services of Seeb of Orden Ogan for mixing and board control, the quintet delivers a mixture of mid-tempo anthems and speedier affairs that intertwine some vicious rhythms, jumpy and energetic drum work, well-placed guitar melodies and lead breaks, plus forceful vocals beyond the rich choir action during all the key chorus moments. They know when to inject a semi-blast/tremolo fueled instrumental section during “Saint of the Fallen” before returning to a mead hall size chorus that just builds and builds to a crescendo through its lock-stock musical hook. Drummer Manuel Gonstalla pounds his kit with reckless abandon, seemingly effortless in his fill flow and transitions like Jorg Michael meets Dragonforce on steroids for highlights like “Crimson Born” and opener “Old Friend Failure”. When Torian decide to slow the proceedings down and go for a more commercial angle in terms of the power chords with keyboard support, you’ll hear “Stonehearted Nation” – perfect for fans of Rage and Iced Earth if turning in a Boston-like mid-range chorus (the fluid arpeggio leads from Alexander Thielmann rather tasty).

It’s obvious that vocally Marc Hohlweck has a distinct preference for a bard-like voice during the verses and gaining ample support in the Orden Ogan/Blind Guardian fashion during the choruses. His fierce rasp matches the thrash-like gallops during “Thousand Storms”, while the Teutonic riffing throughout “Evil vs Evil” allows him to go up and down his register as the gang vocals provide that back and forth contrast during the arrangement. Guitarist Carl Delius as the main songwriter knows how to diversify these songs through twin harmonies, bluesy passages, even theatrical meets straightforward aspects (the final almost nine-minute epic “A Glorious Downfall” injecting acoustic/piano passages and a “Harvester of Sorrow”/ Metallica-like heaviness at the start). The lyrics bounce around between party/fun hangover situations and fantasy/sci-fi content – a great mixture to ensure little fatigue for clichés.

Considering Orden Ogan’s rise to headliner status in the current marketplace, it’s little wonder we are seeing that influence take shape in other bands. Torian execute their power metal with attack and appreciation for more than their forefathers of the German scene, and as such make God of Storms a treasure to behold.