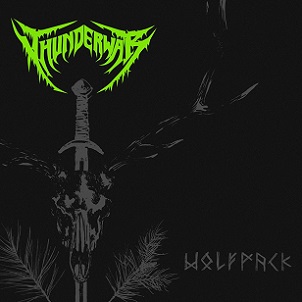 It’s not terribly often we string together “old-school melodic death metal” while leaving out nods to Gothenburg. But, that’s what we have with Poland’s Thunderwar, who were formed in 2012 and thus far, have an EP and 2016 full-length Black Storm under their belt. While the band makes the appropriate nods to all the necessary vintage metal torchbearers, it’s their enigmatic brand of riffing — part black metal, part avant-garde — that dials up the five-song Wolfpack EP.

The often sideways, reeling brand of Thunderwar’s riffs provide the jousting on the opening title track, a veritable thrash basher. However, the chunky, rollicking “Woodland Spirit” slaps together a nice dosage of nimble-footed riffs, sounding neither true thrash nor death, just a seamless force of forward-motion extreme metal. “Circle of Runes,” which puts its head down like Bolt Thrower would circa 1992, is the EP’s best cut, providing a cascade of high-wire melodies throughout the frozen fields of battle-tested death metal. The same goes for “Thunderwar,” which is positioned as the band’s perfunctory call-to-arms of brazen death metal, while a cover of Darkthrone’s “The Winds They Called the Dungeon Shaker” only serves to further spread out Thunderwar’s apparently broad base of influences.

By just skimming the top of melodic death metal, Thunderwar has effectively kept footing in virtually every death metal arena, a difficult feat considering how segmented the style is. But, more importantly, here’s a bunch of young dudes paying homage to the past while looking forward, a trait that benefits the Wolfpack EP immensely, but also should serve Thunderwar well in the long run.