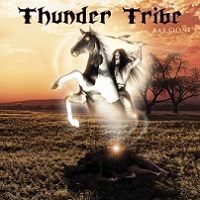 Semi pop-flavored progressive power metal with a bunch of dudes from Kentucky with funky haircuts. That’s the first thought that entered DR’s infantile brain when having a gander at Thunder Tribe’s debut foray, War Chant. Appearance notwithstanding, the band could be trying to find the proper go-between from the bulky Dream Theater/Symphony X frame to Beatles-styled harmonies and arrangements. There’s certainly a large swath of Beatles fans populating the prog scene anyway, especially Mike Portnoy. Dude seems to be in 85 places at once when it comes to prog…

Name recognition comes via the inclusion of singer Michael Duncan, who also fronts the underrated Shatter Messiah. Duncan has a noticeable degree of smoothness to his voice, able to swing by for a traditional power metal visit (“Echoes of a New Day,” “Believe”), but also be on the tender and/or fluffy side with “The Light.” And being that our ears (and everyone else’s) have been tended to with enough bravado and gallivanting, it’s the AOR-soaked “Say Goodbye” (think Lennon/McCartney when they were getting “weird” with  Ravi Shankar) and bluesy “Above the Blue,” which is probably Duncan’s best moment on record.

Inasmuch the progressive crowd makes themselves out be finicky and difficult to impress, they can be had with a band like Thunder Tribe. The various dimensions and poppy pull of a handful of these jams should be a snap in terms of resonating with the Dream Theater/Yes crowd. Furthermore, the distinction in which they operate is worth a pass-by alone, even if the Beatles gone metal isn’t your bag.