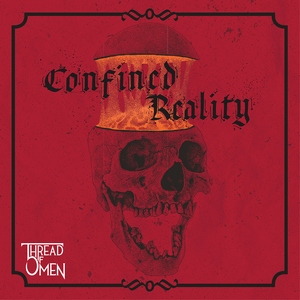 Harkening back to the times when it wasn’t such a dirty word to mix terms like melodic death metal and metalcore, there’s something distinctly late ‘90s/early 2000s about their particular sound, while still keeping a modern edge. Confined Reality is their latest EP, following up on two previous full-lengths, and it hits the sweet spots of both genres without succumbing to either of their pitfalls.

As noted with the decades mentioned, there’s an element of purity to Confined Reality that you might not initially grasp with the time period. With the metalcore/melodeath reference, you might instantly start to imagine a bunch of clean vocal, saccharine choruses but nothing could be further from the truth. Instead, Thread of Omen take the groovier, Americanized elements of earlier acts (think more Darkest Hour or Lamb of God than Killswitch Engage) and merge them with some almost Gothenburgian melodies and darker arrangements. There’s lots of dynamic to be found in trading this melodic eloquence, such as the grandiose riffs/melodies of “Archetype,” with more brutal and driving grooves that counterbalance them. One thing for sure is that it feels rather heavy. Lots of headbangable moments due to the groove and mid-tempo crunch, and the early Dark Tranquillity-esque melodies give the tracks a larger and more notable feel. It’s also noticeable that the songs are given some breathing room with these elements, as the five tracks range from 5-8 minutes – never outwearing their welcome, and never feeling too condensed either.

Confined Reality works because of the combination of its blunt heaviness and layered melodies. There’s a fresh feeling to it, despite the use of common elements because of the way that everything is woven together, something that’s a boost to Thread of Omen’s songwriting. Those into either melodic death metal or early metalcore are bound to appreciate this one quite a bit.