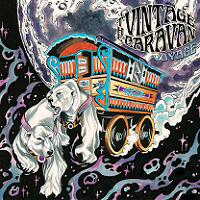 You know you’re balls deep in a scene’s ascension when you have a label like Nuclear Blast signing acts like The Vintage Caravan. Well-played if often highly derivative 70s’ish infused hardrock with a higher degree of intensity than similarly themed Australian act Wolfmother. Your mileage with Voyage is likely to vary highly with how much appreciation you carry for music of the era and bands that have subsequently come to emulate it.

From the word go in opener “Craving” with the upfront riffing and wolves-be-loosed approach, it’s a definite way to set the tone for the album to follow. In ways perhaps it’s the upbeat cousin to the recently covered Sahg album, though where that album focused largely on atmospherics and cosmic melodies, Voyage is about the straight-up rock, (if you can excuse the cliché). Throughout any of the album’s nine songs it is as though the band is channeling the ghost of a bygone era, though like most ghosts there’s not a lot of particular life to the music the band espouses. “Do You Remember” is the on hand ballad and functions well, if only because it’s not as balls-to-the-wall as everything else.

Likewise lengthier and multi-part beast “Expand Your Mind” is an enjoyable listen because of the many twists and turns it takes over its 7 minute run, exploring the less straight-forward and existing as something of a lengthy jam session. “Cocaine Sally”, conversely, isn’t that out of line with the likes of the aforementioned Wolfmother or, to go back further, something like Jet (…Australia by way of Iceland, maybe?), with its succinct and punchy layout.

Late album standouts “Winterland”  and “The King’s Voyage” are largely instrumental jams that explore a much wider aural palette than the ‘song’-based forays elsewhere through the album and are all the better for it. It’s here the band comes out and seems to be able to breathe, rather than playing to archetypes laid down by genre standards or forbearers. Voyage is a frustrating listen, and just not because of the often sterile (and overly loud) production, but because of the worlds it straddles within the genre and its attempts to move beyond it. Good things may come in time but for now Voyage is uneven at best. 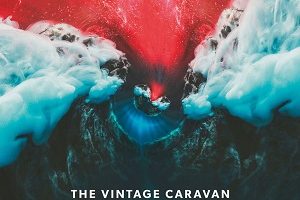 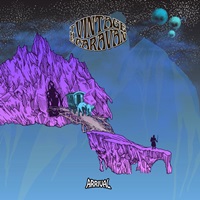