Fronted by ex-Hatesphere throatscraper Jakob Bredhal, one had to figure there was a certain degree of competency to The Kandidate’s Until We Are Outnumbered and there is, yes. But it’s not the jaw-dropping thrash pryo (i.e. 2002’s must-have Bloodred Hatred) that wowed us when the man was doing time with the Danish thrashers; rather it’s punchy and direct, not terribly dissimilar to Hatesphere’s underrated Ballet of the Brute. However, as far as debuts go, The Kandidate could have done a hell of a lot worse.

Wisely remaining in the Euro thrash arena, The Kandidate (who also feature ex members of Withering Surface) let Bredhal’s imitable vocals do most of the talking on this 10-song effort. Nary a melody is to be found, as the band sticks to crunchy, rumbling riffs that waste little time in getting to the point on opener “Strength Through Diversity” and the would-be call-to-arms “Shut ‘Em Up,” which has to be the most fun chorus of the year thus far.

Central to this album’s success is the direct, no-frills approach to the arrangements and the choruses. There’s a lot to latch onto here, plus there’s no silly retro-thrash slant to sully matters. All this does is vault throttling, urgent jams like “In Hell” and the frenetic “Enemy” over the puny retread thrash movement. These guys (and Hatesphere, obviously) paste all of those bands

This thing doesn’t get a higher mark only because of the absence of melody, but we’ll place the blame on this scribe’s affinity for melodic Euro thrash and not on The Kandidate’s song

choices. All in all, this very potent, substance-laden stuff, taking the baton from Hatesphere, or running side-by-side, giving us two for the price of one. 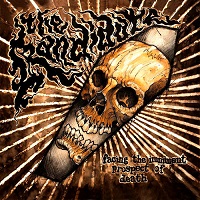