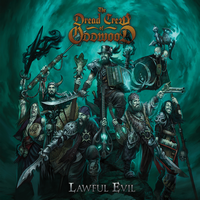 Folk metal tends to divide the metal community, at least when it’s of the more zestful variety. The Dread Crew of Oddwood fall firmly into the category of bands like Alestorm and Trollfest – plenty of musical finesse, but the lyrics and vibe are a bit jovial. Certainly the Alestorm reference isn’t hard to detect with the band title and cover – this is some more pirate-themed metal (at least in theory).

What might take you aback is the complete lack of metal in terms of electric guitar. Alas The Dread Crew of Oddwood operate on an acoustic base, with a somewhat Celtic and folk feel in mind. However, that’s not to say that the essence of metal isn’t there. You can still hear it in the galloping riffs, chord progressions, and a few vocals – it’s just a bit unplugged if you will. The upbeat nature of the music and the frequently pub-oriented lyrical content may come across as a bit too happy for some, but for fans of those bands already mentioned, Lawful Evil really hits the spot. There’s the more instantly catchy numbers such as “Whalin’ Rumbo” and “Side Quest” that are sure to have you singing (and smiling) as soon as you hit play, but there’s some more epic/atmospheric numbers that assure you’ll be back for plenty of rounds. “Siren’s Song” features none other than Britney Slayes (Unleash the Archers) lending her voice to a track that paints the band into a more delightfully dark corner. “Storm Riders” has that ‘raise your glass’ and sing along quality to it, that signifies the end of the album is near. It’s the balance between these types of songs that really give the band a winning image. But if one song truly sums up the band, it’s “Heavy Mahogany,” with its upbeat feel and self-references in check, if it won’t hook you, this one might be for you after all.

Overall, Lawful Evil is a genuinely fun album that will bring you back for more with its charm. The perfect album to have a beer (or three) with and dance through the house, wishing you were out at sea on an adventure.