The Burning Dogma – No Shores of Hope (Sliptrick Records) 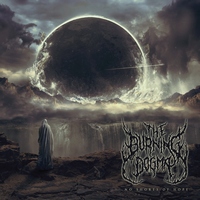 It’s always worth investigating a new release when one checks out a clip and notices it doesn’t instantly sound “like a combination of band X and band Y.” Such was the case when The Burning Dogma’s first full-length, No Shores of Hope, came through the inbox. The band’s own Facebook description touts “dark electro death metal,” but fear not. There’s no death metal rave party coming your way.

Perhaps a different description would work as well – No Shores of Hope blends the sounds of death metal with industrial, gothic, and even doomy influences from start to finish. The death metal that we are describing does sound more “melodic” than “brutal” for those interested (but there are some occasional speed runs complete with blastbeats), but don’t expect anything particularly Gothenburg-y to show up. The riffs are dark, and the melodies also reflect that same image, as you listen to a song like “Burning Times.” This one is a mid-tempo churner that features a neat and foreboding melody to give it some extra kick. Some songs feature some clean female or male vocals, but again, don’t look for anything too poppy to rear its head through the speakers. These are more just palette enhancers, allowing the vocals to move past the more low-growl dominated sections. The industrial influences are more notable in the interludes (but also present in other tracks like “Breach”), of which there are several. For what it’s worth though, the interludes add some notable atmosphere and have a sense of purpose, they aren’t the “let’s just put something here” mentality.

A solid entry point for The Burning Dogma with this release. It keeps the death metal as its main focal point, but isn’t afraid to branch out into other areas if the song calls for it. Lots of potential as they continue to move forward with this direction.