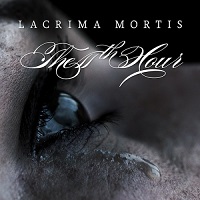 A noticeable improvement over 2010’s rather pedestrian Burden of Grief, Lacrima Mortis finds The 11th Hour and main dude Ed Warby (Gorefest, Ayreon, etc.) striking some able-bodied doom moments across this seven-song effort. The band shot numerous blanks on Burden of Grief, but on Lacrima Mortis, The 11th Hour comes across (successfully) as November’s Doom without the warts-and-all panhandling, and perhaps My Dying Bride circa 1993, when Stainthorpe and friends couldn’t sound any more miserable. So any way you dice it, Warby and co. are clearly on the up-and-up.

Like on Burden of Grief, there’s plenty of jostling between turgid growls and soaring clean

vocals courtesy of Warby. Placement is the key, as the band doesn’t expend all of its energy building up to a clean vocal chorus, instead mixing the two effortlessly. In fact, it’s the nasty death roar of Pim Blankenstein that overshadows Warby’s nasally clean vocal delivery, as heard on the lurching “Nothing But Pain.”

Flirtations with melody are what ultimately pushes Lacrima Mortis over the Mendoza line. Opener “We All Die Alone” hits immediately thanks to a triumphant lead melody that unfortunately, isn’t used enough, while the sorrowful pall cast over “Reunion Illusion” is another charming doom foray. Album closer “Bury Me” wraps things up nicely in true dramatic doom fashion, complete with understated keyboard work and sobbing melodies.

Far from anything that would crack the doom metal world in two, The 11th Hour benefits from Warby’s experience and perhaps even some hindsight, given how flat Burden of Grief was. With Lacrima Mortis, the band should satiate those who like their doom emotionless and daunting.