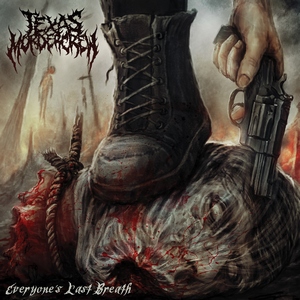 What does one look for in a brutal death metal release? With the expectations of seeking punishing riffs, scathing breakdowns, and ludicrous gutturals in mind, new act Texas Murder Crew brings forth their first offering of ‘bludgeon first, ask questions never’ brutality with Everyone’s Last Breath. Given that the guitarist (Kevin Clark) was once in Devourment, that should give you an inkling of what to expect.

A short and sweet EP consisting of 6 tracks (complete with an intro that focuses mostly on a ‘horrifying’ sample), Texas Murder Crew leave a favorable impression in their ability to get in, smash faces, and get out before tedium sets in. The songs are short and to the point, with a massive bottom end that helps to augment the aggression of the whole thing. Expect some breakdowns in the mix too, and the band delivers some feverish ones, full of the violence that you’d expect from the genre, as well as some solid mid-tempo to blast-driven fury. “Destroy the Witness” is as good an example as any, with emphasis on pounding chugs that dive into a monstrous breakdown as well as some frantic speed runs. Don’t expect too much in the way of intricacy, as these songs are more about bulldozing their way through than nuance, and they play into many of the genre’s norms. That said, they don’t go too far in any direction to the point where it seems absurd (ultra-low gurgles or the tin can blastbeats at the highest possible velocity), and it keeps the music more grounded and enjoyable.

As a first release, Texas Murder Crew find themselves at a strong start with Everyone’s Last Breath. It doesn’t alter the genre’s usual, but it does everything well and with a lot of violent and satisfying finesse. An easy recommendation for fans of the aforementioned Devourment or Severed Savior.