Syryn – Beyond the Depths (Self-Released) 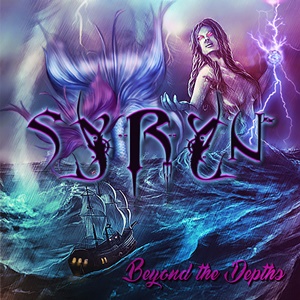 A spin on the Greek mythological creatures who lured sailors with enchanting music to shipwreck on their island, Syryn is a Calgary-based metal band that combine a love of thrash, power and the blues into their style. Starting from an Into Eternity show in 2015, vocalist Sloan Voxx set about finding the right members and became official in 2017. That’s how we arrive at this debut full-length Beyond the Depths, a conceptual album based on a Siren who develops a human aspect which causes her to struggle between instincts and care for these sailors, playing out over the twelve tracks at hand.

Early on you get a sense of playfulness through the pirate drinking-oriented anthem “Three Sheets to the Wind”, the rhythms and tempo aligning with a mess hall atmosphere, Sloan matching her melodies seamlessly through some lower to mid-range commanding twists and turns. Choosing to include shorter interludes or segmentation that moves the storyline forward gives the listener small reprieves before the next full salvo launches – shifting from an Unleash the Archers-style power number like “Unbreakable” through an enchanting Painkiller meets Megadeth type rhythm driven barrage for “Dead Men Tell No Tales”. Between guitarist Byron Gorieu and Paulo Rage they align to encompass a wide versatility of heaviness, solid mechanics, and fiery licks when called for – all aspects showcased right away on “Never Ending Nightmare”. Sloan has that piercing falsetto and multi-octave delivery that can switch from low to overdrive in a nanosecond – no one will doubt her impressive melodies and note-holding propensities top to bottom, similar in stature to Brittney Slayes and Nina Osegueda of A Sound of Thunder. Another plus for this record is the shortness of it – because how many concept records do you know get in and out in thirty-two minutes? The focus helps the listener process the content quicker, probably ensuring quick turnarounds for return engagements.

A possible improvement on the next recording could be a better kick drum tone – the digital triggering makes more of a ‘splash’ noise than probably intended – but it’s a minor fix that never seriously detracts from the potent riffs, melodies, harmonies, and power/traditional songs on display. Beyond the Depths is another sterling example of Canadian might and strength.