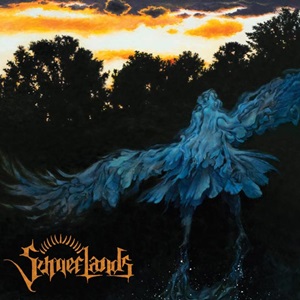 Scene veterans often come together to develop something special when it comes specific sub-genres in the metal realm. In the case of Sumerlands, it’s classic heavy metal inspired by the timeless 70’s and 80’s guitar-driven heydays that this quintet lives for. Featuring ex-Hour of Penance/Atlantean Kodex vocalist Phil Swanson and guitarist/synth player Arthur Rizk (producer for Inquisition and Power Trip among others), the five-piece align themselves in a hypnotic heavy metal style that has a lot of Metal Blade meets Ozzy Osbourne qualities – imposing a stirring, chugging energy that also has the right atmosphere of darkness, doom, and despair.

The aforementioned Rizk along with second guitarist John Powers embody a US power metal game plan that along with a healthy serving of Randy Rhoads/ Jake E. Lee runs of inspiration makes “Blind” and “The Seventh Seal” easy aural favorites, the type of material that would have been gaining print fanzine adulation or bandied about on the tape trading circles 30 years ago. Drummer Justin DeTore possesses the right groove and tempo control, knowing when to throw down a killer fill and get right back into his pounding duties – “Spiral Infinite” assuring him a place on the Appice brothers or Cozy Powell throne as an important key to Sumerlands’ charm. The mysticism of Cirith Ungol has come up around the group – and their occasional doom variable (definitely in Phil’s known 70’s-like haunting delivery) probably justifies the comparison on sinister material like “The Guardian” and “Lost My Mind”.

Most will relish the tighter, focused nature to these eight songs averaging a tidy four-minutes, as the final title cut is more of an atmospheric, half-synth, half guitar oriented instrumental that could easily sit on an 80’s horror movie soundtrack due to its alluring creepy factor. Bonus points for one of the coolest band logos in quite some time (the sun beams around part of their moniker) and a picturesque cover that differs from the generic computer graphic skull and dragon generation templates. You always worry about retro-metal retreading what already exists, yet Sumerlands just takes the aspects they like and makes them their own – not as easy of a feat as it sounds. Maybe along with Necromancing the Stone and Visigoth we are seeing a new breed of American classic/power metal ready to rise from the underground – beats another djent-oriented deathcore group, doesn’t it?