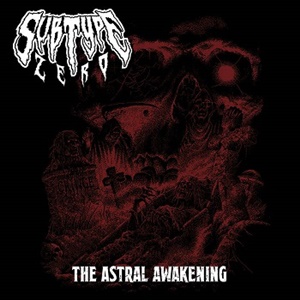 Previously known for the past five years as Cringe, this five-piece wisely changed their moniker to a much more appropriate Subtype Zero for this new full-length The Astral Awakening. Before even pressing play, the attention to detail in terms of a legible logo and black/red graveyard cover alerts the listener that this is probably a death/thrash-oriented release – and they would be correct. After a few spins it’s quite evident that the slice and dice, quick hitting approach works quite effectively in getting their ideas across without an overload of excessive, extraneous passages, preferring to assault the listener with an all meat/potatoes combination that often gets in and out in under three-minutes per track.

The fierce, speedy nature to the riffs along with this vicious guitar tone, a snappy snare sound and pounding, pummeling bass lines makes “Flesh Famine” and “Become Insane” early favorites, while the outer world meets tribal/doomy side comes out for an opposite dynamic on “The Awakening”. The descending chords as well as drenching, raspy screams for “Unprecedented Salvation” certainly promote similarities to Slayer – especially during their Reign in Blood/South of Heaven superiority when whammy bar, thousand notes of flurry made sense against engaging stop/start thrash action. Most will be hard-pressed not to stomp and swing to the slower mosh-part within “Sin of the Innocent”, which gains support for Kreator meets Swedish death-like riffing. On the flip side, there can be a bit of excessive unbalance between certain lead sections against a vocal line that feels like two parties competing against each other rather than uniting for a common cause – beyond the obvious reference points for many hook lines or Araya-isms (check out “Relentless Cleansing” for the latter point). It’s as if the band locked into 1985-87 Slayer, Exodus, and funneled a bit of that crossover D.R.I. charm.

Clocking in at a minscule 29 minutes and change, Subtype Zero aren’t going to bore the aural landscape through their thrash/semi-death activities. The Astral Awakening tows the conventional line, and probably best resides in that catalog of people who want their music primitive and in your face.