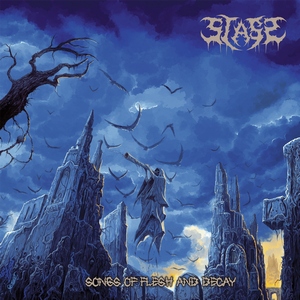 Have we reached the point where we need a metal archive site just for Rogga Johansson? Rogga Archives, perhaps? Regardless, he’s not the entire picture of STASS, but his influence is undeniable, even if the band is named for vocalist Felix Stass (he of Crematory fame, of course). Songs of Flesh and Decay is the band’s second foray into the rich old school death metal territory Johansson oversees, and it’s never short on energy or fun.

The guitar team consists of Johansson and frequent collaborator Kjetil Lynghaug, and therefore one should have a good idea of what to expect, even if you missed out on 2017’s The Darkside. Swedish death metal at its most raging and rollicking, with oodles of melodies flung in whenever possible into a mid-tempo gallop and occasional upticks in speed (and some frantic solos). While it’s a simple and straight-forward template for the band to follow, it never feels to capture your attention. It’s a testament to the band’s writing, in doling out frequently ear-worming melodies at slower moments, and providing hard-driving riffs, that make each song a real blast to listen to. Then you add in Felix’s vocals, which fit like an absolute charm to the whole thing, and you are off to the races! The songs are to the point, none even hitting the 4-minute mark, so they cut right to the good stuff: Stass barking out some brutal yet enunciated roars while the riffs grind and groove while the melodies sing. It works without fail on each track.

Songs of Flesh and Decay is more SweDeath metal, but it’s from such good company and performed so lovingly well that you just want to listen to it once more. The riffs and vocal patterns are fun and memorable, and it hits that sweet spot between destructive energy and eerie melody remarkably consistently. A great way to start the year with old school charm.