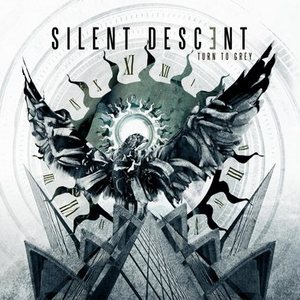 As we walk further into the digital and electronic age, it seems more metallic acts are beginning to embrace the times. UK-based Silent Descent has been implementing turntables and trance into their modern melodic death metal for over ten years at this point, so consider them ahead of the curve in this department. Third effort Turn to Grey further hones what the band has been trying to achieve, even if it is sometimes a bit rough around the edges.

Silent Descent is capable of some innovative and truly infectious material when they are at the top of their game. The blend of latter day era Soilwork riffing and synth combos, metalcore-esque grooves with often dance-y and upbeat electronica is a formula ripe for exploitation. Heavier cuts like “Voices” and “Hurt Like You’ve Never Been Loved” are immediately catchy and fun, while walking the fine line between metallic heaviness and synthetic bounce. Speaking of Soilwork, Bjorn Strid lends some vocals to “Vortex,” which almost feels like a more bubbly version of a Figure Number Five cut. The lively nature of the material should be enough for melodeath fans to be successfully reeled in, despite any electronic trepidation. But there are a few minor issues holding them back from more outright success. A few missteps in the balance, such as the rave-friendly “Rob Rodda” or slightly too syrupy “Paths Winding” bog things down, particularly in the album’s back end. Which is ultimately the biggest flaw – for an album of this type, it feels far too long. Despite some of the modern injections, songs begin to feel formulaic by the end and feel as if a few tracks could have been cut to make a more flowing release.

While the modern approach may not be for everyone, Silent Descent are onto something with their particular brand of ‘trance metal.’ With a bit more trimming next time around, the foundation has been set for a very strong modern metal release for those unafraid to dance the night away.