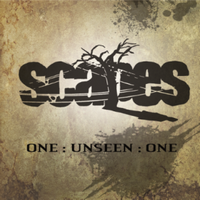 In the busy fall season, sometimes “smaller” albums just get lost in the mix. Such is the case for Finland’s Scapes and their debut effort, One:Unseen:One. Digging into this one while trying to start closing up shop on 2014, it turns out that is was one of the better surprises of the fall influx.

Raising the flag high on the Finnish traditions of morose metal, there’s not a one size fits all label that can truly nail Scapes sound. Taking hints from bands such as Anathema, Katatonia, Paradise Lost, Arcturus, and even Green Carnation, there’s a suitably wide spread of different gloomy flavors in the mix on One:Unseen:One without sounding like a pile of influences slapped together. Vocally speaking, it’s almost completely in the clean spectrum (minus some well-placed growls during the appropriately titled “Doomscapes”). The vocals are the finest treat on the album, with a faint similarity to Tuomas Tuominen of Fall of the Leafe (especially on “Unseen Infinite”) and keeping a balance of softness and emotive power when needed. Outside of the notably heavier “Doomscapes,” there are some more acoustically driven tracks such as “Song of a Mountain” and “Every Waking Dawn” to contrast against the somewhat crunchy riff approach of “The Melancholy Cycle” and previously mentioned “Unseen Infinite.” The variety keeps things moving nicely, and shows the band capable of more range than many tend to show within these realms.

The band does have some leeway with where they go from here, and any direction could be suiting. They could continue along the “quieter” path or swing towards the heavier “Doomscapes” direction and win out either way (though they could always just head in the same pathway and find just as much success in truth). Either way, enjoy One:Unseen:One for what it is: an intriguing debut that tactfully a number of doomy and gloomy influences in a thoroughly entertaining way. Scapes is a band you should be hearing more of in the future.