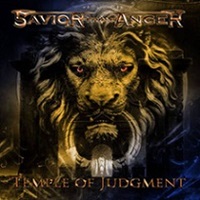 Picking names for metal bands can be a challenge for sure – yet the Italy/Germany/US act Savior From Anger takes on a Vicious Rumors song off their killer Welcome to the Ball record, so there’s already one step in the right direction to this scribe. Together since 2006, guitarist Mark Ryal remains the sole original member left in the quartet – as this third full-length Temple of Judgment contains a fresh new lineup to push forth a brand of US metal that’s rare to hear from newer bands, as it seems aggression and intricacy run rampant in the domestic movement these days.

During the 1980’s the NWOBHM scene influenced many US musicians to go in different directions – some speedier and faster for thrash, others being more ‘power’ inclined, highlighting multi-octave melodies and equally engaging riff hooks. Savior From Anger comes from the latter school for certain where bands like Armored Saint, Metal Church, Riot, and Savatage gained major attention for their musicianship and classic adherence to traditional techniques. Occasionally the band chooses to get a little more jackhammer in rhythm elements, giving them a semi-thrash charge a la Annihilator on “The Eye” where Mark’s intuitive knack for the right mid-tempo transitions go seamlessly against the heavier verses. Ardent followers of Attacker and Sleepy Hollow may be aware of veteran singer Bob Mitchell – who uses his sinister personality to channel a lot of his youthful David Wayne meets Carl Albert-ish high octane charm on the double shot salvo of “Thunderheads” and “Chosen Ones”.

A six-minute plus epic ballad like “Starlight” could be a scene stealer or a deal breaker depending on your point of view – drummer Michael Kusch appearing to be slightly stiff at this stilted tempo, while the opening and closing (the latter featuring a baby crying plus bells) gives a softer touch. The guitar play excites throughout, Mark certainly taking inspiration from Criss Oliva, Mark Reale, and Kurdt Vanderhoof – also gaining some songwriting assistance on the record from ex-Metal Church guitarist Craig Wells.

Overall, Temple of Judgment contains a lot of songs that will cause the denim and leather brigade to headbang or air guitar to these 11 songs – but this isn’t exactly going to obliterate Thundersteel or Symbol of Salvation by comparison. We could use more US metal though focused on true ideals – less hype and more substance.