Salvación – Keep Up the Fire (Self-Released) 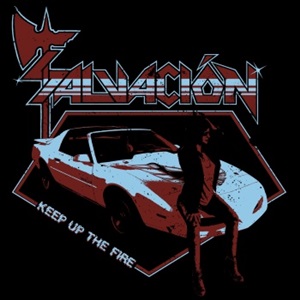 Old school traditional metal elevates heart rates, encourages simulation instrument air maneuvers and remains a constant underpinning in a scene looking for vitality in these diverse, crossing sub-genre driven times. Diehards ‘til they die, North Carolina representatives Salvación may be new to most, and yet have three full-lengths and another single under their belts since forming in 2009. The newest Keep Up the Fire EP delivers four more songs that live for NWOBHM ethics, searing twin rhythms and spotlights, plus a high-pitched vocal attack that’s 100% pure to the bone.

Nothing fancy on the primal plug in and play tones or production front – the band keep focus on memorable musical hooks, easily engaging choruses, and tempo changes that aren’t going to complicate matters. They’ll even reach out and grab a 70’s-oriented riff that can be similar to a bigwig breakthrough act like Kiss for “Straight for the Throat” (think a higher on the neck version of “Shout it Out Loud” for the opening chord sequence). Overall though, the quintet certainly professes a lot of love for everything from the 1979-1983 era of UK metal: Angel Witch, Saxon, early Def Leppard and Iron Maiden clear favorites – the 6:10 closing cut containing a lot of those epic swings and dramatic turns plus vocals from Elliot Madre that are a cross between Bruce Dickinson and the current Skull Fist/ Enforcer brigade (hitting a lot of falsetto highs that push to the max on the elevated chorus).

We all know that everything in the genre has its roots from somewhere – at this point it’s more about tying things together effectively and putting your own stamp on the proceedings. Salvación choose to be original in some of the rhythm section developments, occasionally going for simpler or doom swing momentum shifts that propel the guitar play even further to heroism status. Top things off with a killer band logo plus a soundtrack of tunes tailor made for those keg parties where bonfires reign supreme, and Keep Up the Fire is another ideal American addition to the revitalization of classic heavy metal. Crank this up to ten.